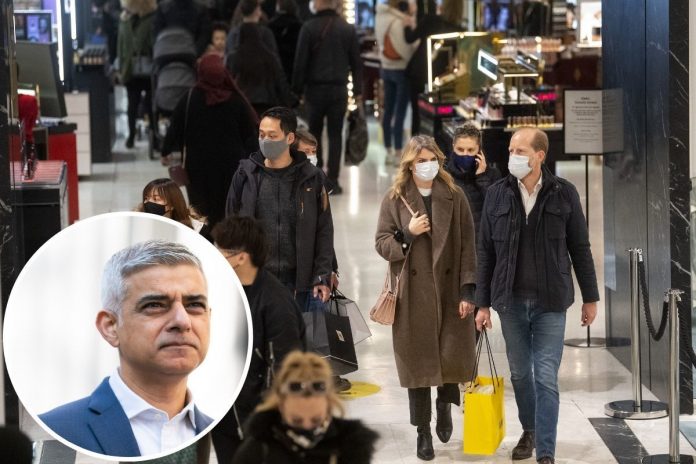 Sadiq Khan said London needs to be “careful” about reusing offices and businesses without first “seeing if we can do all we can” to get people back to central London.

The current Mayor of London spoke to business leaders from across the capital at an event hosted by the London Chamber of Commerce and Industry ahead of the Mayor’s election on May 6.

Responding to questions about central London’s economic recovery from the Covid-19 pandemic, Mr Khan said the increase in footfall and the return of domestic tourism this summer “will kick-start office work.”

He said: “I don’t foresee that our future will be for everyone to work from home, but I also think we have to be realistic that not everyone will be going back (to offices) in the number we had before the pandemic. .

“On a normal day, we made more than five million bus trips, more than four million metro trips. I don’t think we will be going back in the short or medium term. It means being smart and innovative in bringing people back. ”

Mr Khan, who is seeking re-election on May 6, told business leaders that a £ 6million city hall campaign announced earlier this year will help ‘jumpstart’ domestic tourism and stimulate the economy of central London.

He believes this can capitalize on the rescheduled Euro 2020 matches at Wembley this summer as well as the ‘world-class cricket’ coming to the capital.

“I think we need to be a little careful about rushing into reuse without seeing if we can do whatever we can to get people back to the West End,” Khan said.

He added that reusing office or commercial space in places like Oxford Street would be “counterproductive”.

He added that “it would be wrong if there were a lot of apartments there, especially if they are not of good quality” if Oxford Street is to remain a “world class retail space”.

Last month, a survey of around 500 businesses in the capital conducted by the London Chamber found that more than half planned to continue working remotely in some form after the pandemic, and around 32% have stated that they would operate with limited physical space, such as offices. .