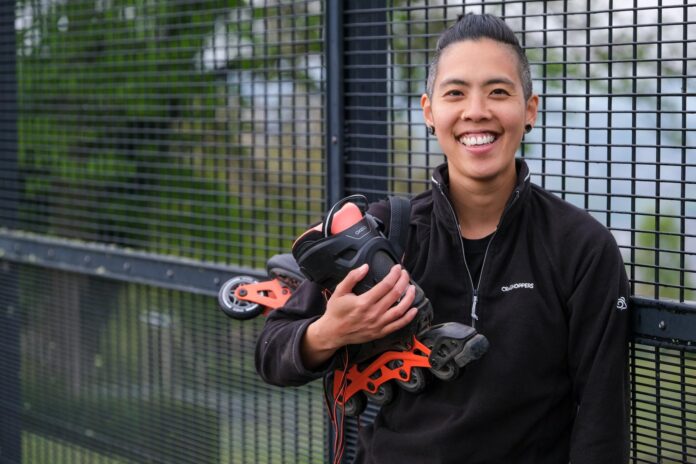 The physical challenge he faces is tackling a 1,500km inline skating and cycling challenge across England, starting this month.

It’s this challenge that never stops for Frit, who now lives in Sheffield.

Born a girl, the 32-year-old identified herself as a woman for many years.

Glide For Pride will be the start of Frit’s open discussions about being a transgender man and learning to embrace a new level of authenticity.

The physical challenge seems simple in comparison, but it’s still a challenge as he only learned to rollerblade this year, training on a basketball court in Bolehills, Walkley.

Frit is new to Sheffield, but the city has been on his mind for some time. He enjoys rock climbing and hiking, so it makes sense.

He and his partner Frankie Dewar have moved from Reading to Walkley and are having fun. They were eager to explore the city. “We just found a house so out of place and see what happens,” says Frit.

“Sheffield has been on my radar for years. A few years ago I wanted to move here but the circumstances did not match.

“Then last year we were thinking about moving because of the next trip and it made sense to be Sheffield.”

“I’m the outgoing type and being next to the Peak District was a great thing. I used to drive from Surrey to be there.

He also wanted to be in a city and experience the diversity it offered. “What I discovered in Sheffield is already so good,” he says with a smile.

Born in Nottingham, his family moved to Bracknell when he had one. His father, a civil engineer, and his mother, who became CEO of a charity, were from Hong Kong.

“I feel like I took them for a ride,” he says. “All they wanted for me was a stable job and income.”

That didn’t really happen as Frit is now an independent filmmaker, which isn’t particularly stable or guaranteed to earn an income.

Speaking of his childhood, it’s clear that he had a lot to think about.

“Under 10, I can see the characteristics of someone who is transgender, who wants to wear boyish clothes and cut my hair short – I was wrongly a boy,” he says.

“Part felt right to me and part was unsettling because at the time I had no idea that transgender people existed.”

Frit was helped by having a best friend who was gay and identified as a lesbian from the age of five. He is worried about the way we discuss these issues.

“Think about the way we talk to children,” he says. “Questions like ‘Is this your boyfriend’? For me, I didn’t know what a relationship was, but I knew I didn’t want to hold a boy’s hand. I wanted to be a male counterpart, I knew that deeply.

Its cultural heritage was also a problem.

“I grew up as a British-born Chinese, I just didn’t kiss him,” he says. “I was fortunate to have other class members from various ethnicities, I was not the only non-white, but all I wanted to do was fit in.

“I remember being a teenager and saying, ‘Forget I’m Chinese.’ I have turned my back on a lot of traditions and heritage.

He got tangled up and ended up going to Bournemouth University to study visualization and animation – in other words, visual effects in movies.

But Frit started to love cinematography and this led him to find a job as a production assistant. Initially producing and filming corporate videos for clients such as Network Rail, Sainsbury’s and Barnardo’s, Frit took to filmmaking to tell stories that left his mark.

Now specializing in adventure documentaries, he recently established a film studio, Passion Fruit Pictures, to add diversity to the adventure industry through film.

He says: “I love adventure films but only a tiny minority of the population is represented there. The main obstacle is funding. It’s a matter of knowing what was sold before will be remade. “

So Glide For Price will be filmed to combat the lack of diversity that Frit talks about.

He said: “Belonging is a key human need, yet so many members of the LGBTQIA + community often feel that they do not belong to mainstream society.

“Too often the mainstream media demonizes the LGBTQIA + community and portrays us as predatory or ‘brainwashed’. When you are in the formative stages of understanding your sexual orientation or gender identity, and the majority of readily available media sources provide this level of misinformation, it is no wonder that you may feel as though you are were not in your place.

“It can also create dangerous environments for community members to ‘come out’ and live authentically.

“I too have felt this alienation …