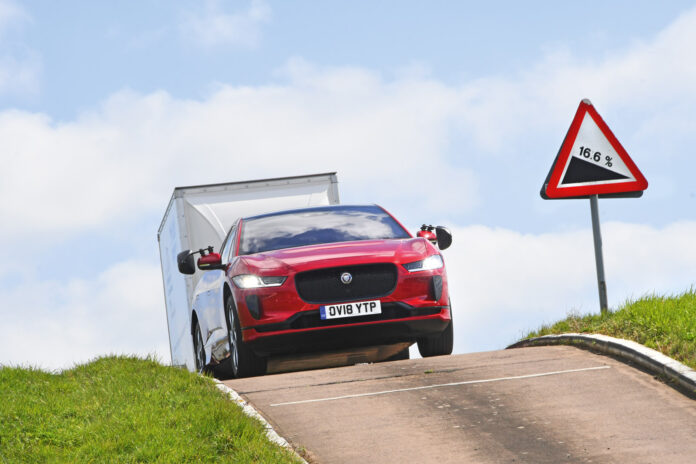 As sales of electric cars continue to skyrocket, so do buyers’ expectations. Not long ago, electric vehicles were considered second handy cars for small local hops, but little more. Now, owners are more ambitious and expect to travel longer, longer – and in many cases that means the ability to hitch their battery-powered machine to a caravan or trailer. Is the latest generation of electric and hybrid vehicles up to the task? Here is our in-depth guide with all the answers.

Why can’t some electric and hybrid cars tow?

With their torquey and powerful electric motors, you’d expect electric and hybrid vehicles to be the perfect towing partners, capable of pulling heavy loads with much less effort than traditional internal combustion models. Yet delve deeper into the specifications of many of these machines and you will find that very few of them are capable of being hitched to a caravan or trailer. It’s not that you can’t physically attach a tow bar. It’s just that the vast majority have not received type approval.

Why not? Well, there are a number of reasons, from specific EV technology to range issues, but perhaps the biggest stumbling block from a technical standpoint is mass. Batteries are heavy, which means that many EVs tend to weigh much more than a similar sized gasoline or diesel machine. (A gasoline-powered Volvo XC40 weighs at least 1,655 kg, while the electric version tips the scales at 2,188 kg, a difference of 533 kg.) Like the brakes and transmission. Even on lighter hybrids (around 1800 kg or so), the combined weight of the car and the caravan could reach three tons, which would require significant mechanical reinforcement.

Similarly, the complex regenerative braking system is also a limiting factor. When slowing down, the electric motor of an electric or hybrid vehicle acts as a generator, returning energy otherwise lost to the battery. A by-product of this process is a useful “engine braking” effect similar to that of internal combustion machines. It is specially designed for the curb weight of the car, so there is a risk that the system will be overloaded by the extra kinetic energy created by a heavy trailer, especially on steep descents. Of course, many EVs allow you to turn off regenerative braking, but while it could save the motor, it would put enormous strain on the friction braking system.

This is even true for braked trailers, which have a fairly simple mechanical drum brake system. It is triggered by the force of the trailer or caravan pushing down on a tow bar mechanism when the tow car slows down. However, this only works when relatively high braking loads are detected, so most of the time it’s the brakes on the tow car that do the lion’s share of the work.

Finally, there is the issue of scope. Couple a heavy or aerodynamically inefficient load to the back of your battery-powered car and you will likely see a dramatic increase in electricity consumption. This is a particular problem for caravan owners, who tend to want to travel everywhere in search of campsites. As an example, in 2020 Audi North America used an E-tron to pull an 1,800 kg trailer on a 500 mile trip from Tulsa, Oklahoma to Austin, Texas. Overall, the electrified SUV handled about 100 miles between charges – less than half of the car’s 241-mile range when traveling without a connection.

Electric cars that can tow

However, while many EVs can’t tow, there are a few that can – and more are hitting showrooms all the time as buyers slowly begin to be weaned off fossil fuels. . Unsurprisingly, Tesla is leading the way in electric vehicles that can tow, and its gull-winged Model X SUV is capable of hauling up to 2,270 kg using a braked trailer.