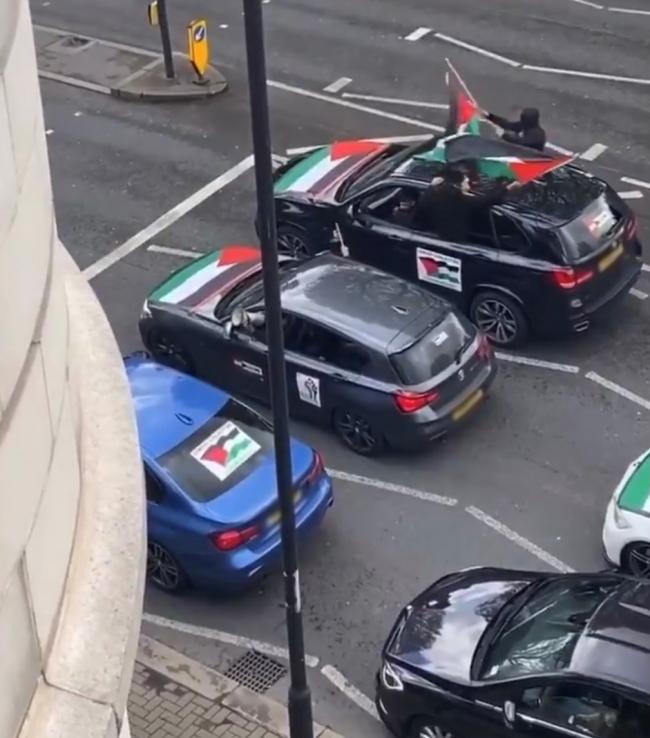 Four people were arrested after a convoy of cars draped in Palestinian flags was seen with passengers shouting “f *** the Jews” across north London today.

A video shared on social media shows cars driving along the Hampstead area of ​​Finchley Road today (May 16), with a man yelling into a loudspeaker.

He went on to say, on a road with one of the biggest Jewish community centers – JW3 -: f *** their mothers, f *** their daughters and show your support for Palestine ”.

The man can also clearly be heard saying “rape their daughters, we have to send a message”.

Later that day, Metropolitan Police said the vehicle had been identified at the A40 in Hillingdon, and it was revealed that four arrests had been made.

They were taken into custody, where they remain.

Superintendent Jo Edwards, in charge of the police operation, said: “This behavior was very shocking and will not be tolerated.

“I understand this would have caused considerable concern within the community and we have organized additional patrols in the St John’s Wood and Golders Green areas this evening.

It comes after thousands of people marched through central London to support the Palestinians in a “free Palestine” movement.

At least 139 people have been killed in Gaza and nine in Israel since Monday, amid ongoing conflicts.

The Community Service Trust, an anti-Semitism charity, wrote on Twitter: “We are fully aware of the appalling anti-Semitic intimidation and incitement from a ‘pro-Palestinian’ car convoy from Bradford through the north of London to central London and we were in urgent discussion. with @metpoliceuk. ”

Housing Secretary The Right Honorable Robert Jenrick also took his thoughts on Twitter and said: “This, in the streets of London, is deeply disturbing. Vile and criminal hatred like this must not be tolerated. ”

He added: “Whatever your view of the conflict in Israel and Gaza, there is no justification for inciting anti-Jewish or Muslim hatred.

“Some of the terms used on this weekend’s marches and in social media posts are intimidating, hateful and racist. They need to stop and be dealt with if they don’t.”

Whatever your view of the conflict in Israel and Gaza, there is no justification for inciting anti-Jewish or Muslim hatred.

Some of the language used on this weekend’s marches and in social media posts is intimidating, hateful and racist.

It must stop and be resolved otherwise.

A Metropolitan Police spokesperson said: “We are aware of a video appearing to show anti-Semitic language being shouted from a car convoy in the St John’s Wood area this afternoon.”

Prior to the arrest, the Met said “this kind of behavior will not be tolerated.”