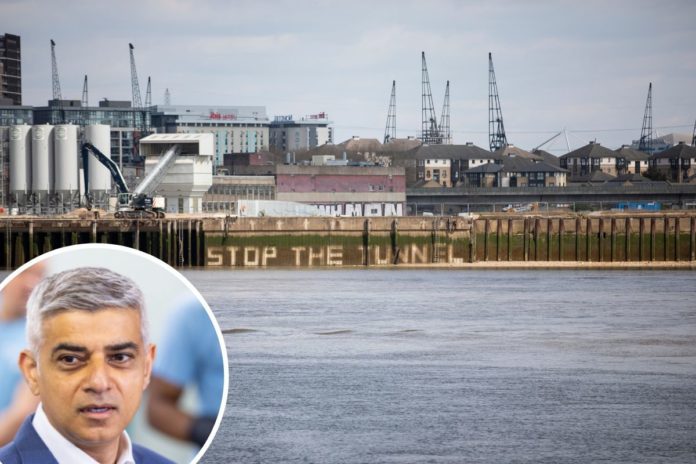 The Mayor of London, Sadiq Khan, said canceling the Silvertown tunnel “is not a sensible option”.

The proposed road tunnel that will pass under the River Thames between Greenwich and Silvertown has met with strong opposition over fears it could lead to increased air pollution in the area.

But the mayor of London revealed today that there are no plans to reconsider the project at a London Assembly meeting.

Mr Khan said: “The Assembly will be aware that the cost of canceling the contract, without disclosing commercially sensitive information, is a lot of money and therefore is not an option that I think is reasonable.

“I would also point out that Londoners may not be aware, that this is a contract which is not funded from TfL’s budget. It is a contract to design, build, maintain and finance, and in fact it is paid over many years as revenue is collected through the toll, both over the Blackwall Tunnel and over the Silvertown Tunnel.

The mayor’s comments came following a question from Liberal Democrat member Caroline Pidgeon, who asked him if he would “pause and rethink” the project in light of the Covid-19 pandemic.

But Mr Khan stressed the need for another river crossing in east London and said “doing nothing, as suggested, is not an option”, adding that congestion around the Blackwall tunnel was “still the same during the worst part of the pandemic” despite fewer car trips.

Local climate activists, scientists and politicians fear the Silvertown Tunnel will increase levels of nitrogen dioxide, carbon emissions and particulates in the region as more vehicles, including trucks , take the passage.

Sadiq Khan said the project will include ‘extended’ air quality monitoring, while TfL commissioner Andy Byford said today he believes particulate levels will be measured on roads tunnel access, although TfL has previously stated that this will not be the case.