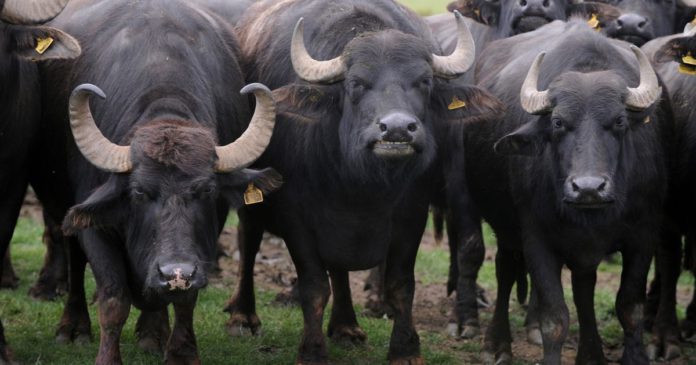 A father and son have died after being gored by a water buffalo on their family farm in Wales, an investigation has found.

Ralph Jump, 57, and his son Peter, 19, suffered fatal injuries when they were attacked alongside their daughter Isabel, 22, who survived the incident on the small nine-acre property in Gwehelog, in Monmouthshire.

The eldest, Mr Jump, managing director of a heating company, was born in Maldon, Essex but had lived in Somerset before his family moved to the farm to use his experience as a herder of livestock.

Gwent Coroner’s Court in Newport learned Thursday that the family kept Mediterranean buffaloes to sell soap using their milk, but that the four-year-old bull involved in the attack – named Yolo – had taken on Peter.

Mr Jump’s wife, Josephine, said the family bought two cows and a bull in 2016, and although in the first two years there were no issues, they later noticed that the bull “didn’t like Peter” and would hold his head and “look at him”.

“The bull never behaved like that with me or (Ralph) and we were keeping Peter away from him,” she said.

Mr. Jump was in the family kitchen just before 3 p.m. on May 5 last year when she saw a ring of hay in the field outside had been pushed against an electric fence and asked his husband to move it.

She said in a statement that she was cooking when Isabel walked into the kitchen shouting that Yolo was “pushing daddy in the field” and quickly rushed outside after grabbing a stick.

“I could see him being rolled down the hill by the bull and I could hear him moaning. I got in between them but he kept trying to get revenge on him. He was moaning but seemed unconscious, ”she said.

Ms Jump said her son Peter, who was returning from college due to the coronavirus pandemic, arrived at the muddy field with an iron baton to “keep the bull away” from his father.

“All of a sudden the bull started looking for Peter and got him,” she said.

The audience was informed that the terrain of the land was “dry and hard and difficult to navigate”.

The bull started to return to where Mr. Jump was lying on the ground, prompting Ms. Jump to try to protect him, but she said she realized “he’s gone.”

“I couldn’t hear him and I knew he was dead,” she said.

Ms Jump said the bull then started attacking her daughter, who was also standing on the ground as she called emergency services, and described being “dragged” by the animal before it was ‘He loses interest and starts attacking Peter again.

Emergency services attended the scene and noted that Peter had “an obvious hole in his neck.”

Peter was taken by air ambulance to hospital with “serious” injuries, while his father was pronounced dead at the scene and it was later discovered that he had suffered multiple chest injuries, including including smaller needle stick injuries.

Peter, who had suffered rib fractures and lacerations, underwent surgery at University Hospital of Wales in Cardiff but could not be properly ventilated as he had blood in his lungs and later died during the day.

Isabel was released from the hospital after suffering a serious leg injury.

Armed police who arrived on the scene shot the bull down.

Sara Lumley, a health and safety inspector with the Health and Safety Executive, said evidence from the Jump family showed there were “previous signs of aggression from this bull,” but even if he had not shown aggression before “there is no such thing as a safe bull”.

She referred to guidelines for keeping cattle that their handling should not be undertaken without precautions in place, and said Mr Jump should have both entered the field with another person as a lookout and also used “some sort of separation or refuge” like a tractor in case they were put in danger.

Mr. Jump’s medical cause of death has been attributed to multiple injuries, trauma and ischemic heart disease.

Peter Jump’s medical cause of death was given as cardiac arrest, lung and abdominal injuries, and multiple trauma, while the jury concluded his death was the result of mishap.