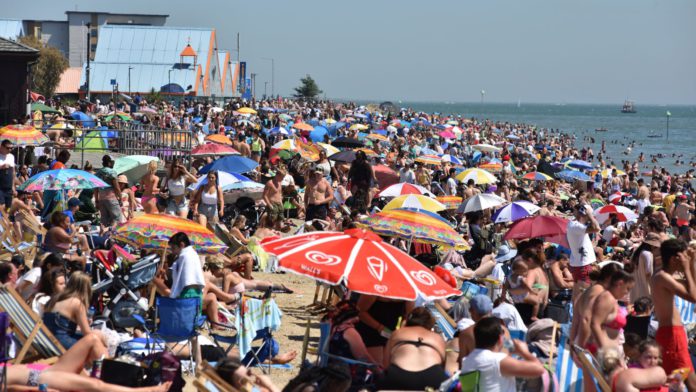 Weather warnings for the extreme heat were issued after a record number of heatwave deaths were recorded in England last summer.

Dr Will Lang of the Met Office told a Local Government Association (LGA) virtual briefing that red and orange warnings can now be issued for areas expecting unusually high temperatures.

It comes as Public Health England (PHE) recorded an additional 2,256 deaths from all causes in the country during the three periods officially classified as “heat waves” last summer – the highest number since its start. records in 2004.

Listen to and follow ClimateCast on Spotify, Apple podcasts, or Streamer

Some 1,734 of those deaths were recorded in the 10-day window in August alone.

The excess deaths are calculated by comparing the average number of deaths on heatwave days against the average of the previous and subsequent seven-day periods.

This includes the adjustment for coronavirus-related mortality.

Dr Will Lang, head of civilian contingencies at the Met Office, said the service is being launched as heat becomes “a much bigger problem” due to climate change.

He told the conference: “We will be able to issue what we call ‘extreme heat warnings’ if necessary this summer and even for the following summers.

“These will be taken into account for the most extreme heat episodes like the one we saw last August, so around 30C (86F) during the day and 20C (68F) at night, and that persists for a few days or more. .

“What we’re doing is highlighting the impact on the general population of heat and also the likely disruption of infrastructure – things like transportation and power grids.”

The warnings will coordinate with existing PHE thermal health alerts, which are designed to alert medical professionals.