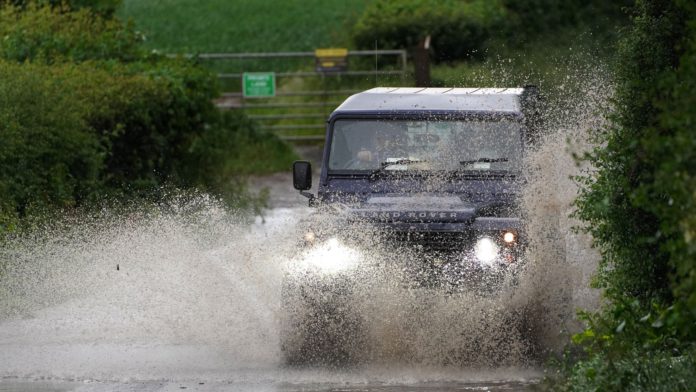 Flood warnings were applied across the country for the weekend after parts of south-east England experienced a month of rain in one day.

The Environment Agency issued 39 flood warnings in London, Kent, parts of the Home Counties, the West Midlands and Wiltshire after some areas saw as much as 67mm of rain.

Dancers End in Hertfordshire, Drayton Parslow in Buckinghamshire, Toddington in Bedfordshire and south Farnborough in Hampshire, had rainfall between 65mm and 57mm, while Otterbourne also in Hampshire topped the charts with 67 mm from 11 p.m. Thursday to 5 p.m. Friday.

The Met Office said temperatures dropped across the UK after sweltering weather earlier this week, and torrential rains that could cause flooding are expected in parts of the south.

A yellow weather warning for rain covering much of England except Devon, Cornwall and the Northwest, was also issued.

Met Office spokesman Grahame Madge said: “In the southeast there will be rain every day for the next few days, and some places could see up to 80mm (3.2 inches) Friday.

“The heaviest rains will be in places of Hampshire to Yorkshire, where there is a good chance that we will have intense rainfall which will dissipate this evening. “

He added that Saturday had the “potential to be drier” in the south, but the flood is expected to return on Sunday and last until next week.

Drivers have been urged not to plow flood waters, with the Environment Agency warning that only 30cm of running water is enough to float a vehicle.

The DVLA advises drivers to double the usual separation distance between their vehicle and the one in front, by reducing speed and using low beam headlights.