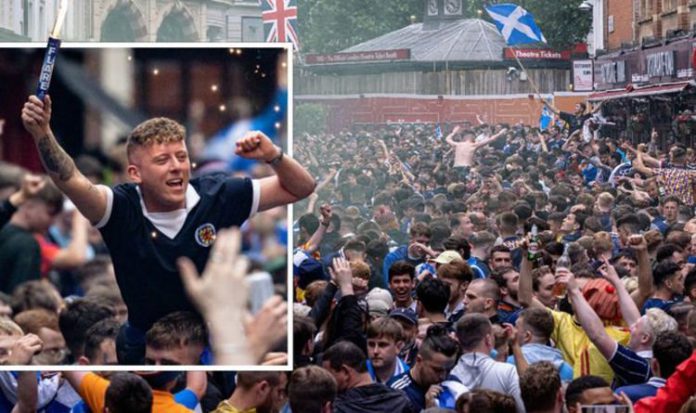 An estimated 20,000 Scots have already made the trip to London for the highly anticipated match which kicks off at 8pm at Wembley tonight. While making the trip, fans are ignoring calls from Met Police and London Mayor Sadiq Khan, who urged fans to stay away. But the warning fell on deaf ears, with football fans taking to the streets of London in droves this afternoon, partying in Leicester Square and leaving the capital’s landmarks littered with rubbish.

In a statement from the Met Police, fans have been warned to “behave with respect” and “stay socially aloof.” But the warning does not appear to have been heeded, as Leicester Square in London was packed with fans – some of them throwing flares and singing loudly.

Chief Inspector Joe Stokoe, spokesperson for the Met Police Operation Euro 2020, said: “We are delighted to host the Euro in London. People have been waiting a long time for this to happen and we know everyone is very excited, so we ask members of the public to take care of themselves and others and to take the opportunity safely and responsible manner.

“Our officers are here to take care of you, so please speak to them if you have any concerns. Stay alert and report any suspicious items to the police, and also be aware of the weather, which shouldn’t be good. .

“There will of course be people in London who will not watch the game and we urge you to consider these people and behave with respect.

“London also remains in a public health crisis. There are government guidelines and we are asking people to follow them and stay socially distanced.

“We have contingency plans to deal with a number of potential incidents as they arise, but my message is clear: if you don’t have a ticket to the matches, the fan zone or officially booked in a pub, bar or club, please do not come to London – you might end up missing the game.

“Last night we took the precaution of issuing a section 35 dispersal order which is in effect until 3:00 pm on Saturday 19. We have implemented a flexible policing plan to reduce the likelihood of crime, disorder and antisocial behavior. “

George Galloway, one of the main critics of Scottish independence, has condemned the actions of Scottish fans.

He wrote on Twitter: “I hate anything about Scottish nationalism.

“I am appalled by some scenes in London.

“I hate what the separatists have done to my country.

“But tonight I support Scotland to the end and with all my broken heart.”

The so-called Tartan Army arrived in London yesterday afternoon and assembled in the West End from 3pm.

Fans were spotted partying at the William Shakespeare Fountain in Leicester Square yesterday afternoon, which they turned into a giant bubble bath.

JUST IN: UK Covid cases rise by 11,000 in biggest daily increase in months

The order gives police officers and police community support officers the power to exclude a person from an area for 48 hours with the authority of an inspector.

Mr Khan had urged ticketless supporters to ‘enjoy the game from Scotland’ because he feared a large influx of people would cause a ‘serious risk’ of the spread of Covid-19.

Scottish Prime Minister Nicola Sturgeon is under pressure to condemn the behavior of Scottish fans.

She faces double standard accusations from some social media users who have claimed the PM will speak out if they are English fans in Scotland – or even Rangers fans in Glasgow.

One Twitter user blasted: “Not a whisper about the potential to kill thousands with the spread of Covid following the descent of 30,000 people in London and back to Scotland.

“Sturgeon has been very quiet, but rest assured that if it was English fans in Glasgow she would be kicking.”

Another wrote: “If so many English fans had come down to Scotland without tickets I’m sure Nicola Sturgeon would have a lot to say and keep saying it.”