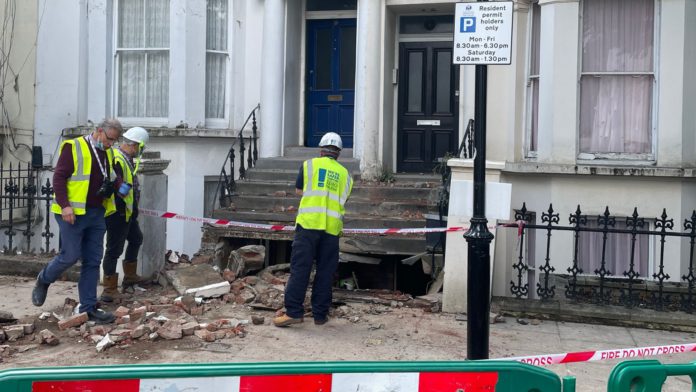 Thirteen people were rescued after a roof collapse trapped them inside a building.

Firefighters were called to a building in Ladbroke Grove, west London, Sunday evening after the partial collapse of the exterior fascia of the roof.

Ladders were used to bridge the gap between the steps of the building.

Andrea Lovell, who lives in one of the properties worst affected by the damage, said she put her 10-year-old to bed last night when she “heard a bang” before she “saw dust “and” the stairs were half gone “.

“We are traumatized, we have no clothes, I cannot work, we cannot do anything,” she added. “We have nothing at the moment, we are basically homeless and we don’t know what’s going to happen.

“But we are happy that no one is hurt, I just want to go home, all my things and my animals are still in there.

Another local resident, Melissa Iijertwood, said that although she was not affected by the collapsed roof, she was “worried” for her neighbors and took one in.

She said: “They are traumatized, I am happy that I can at least help some of those for whom it has been worse.

“If it had been the day before, someone would have been killed.”

Station Commander Brett Loft, who was at the scene, said: “Four properties were affected by the collapse, which involved part of the parapet facade at roof level.

“Debris had fallen on front steps of properties and trapped people inside.

“Firefighters led 13 people from different apartments inside the building to safety using ladders to bridge the gap between the steps.

“Fortunately, nobody was hurt”.

Teams remained on site for about four hours, with four fire engines, three …