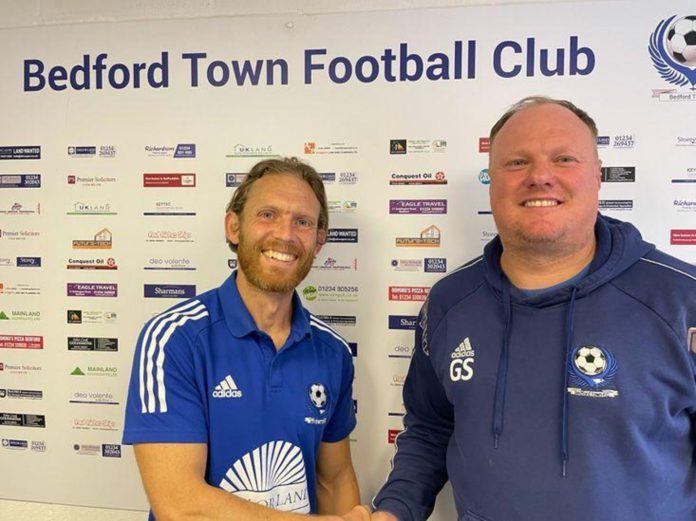 The holiday will see a brace in the PitchingIn Southern League Division One Derby Central Bedfordshire, as the Eagles travel to AFC Dunstable on Saturday 28, before hosting Biggleswade FC on Monday 30.

The borough’s first derby takes place on December 4, when the Kempston Rovers visit Eyrie, with the reverse on March 19. Then on December 27, the Eagles make the long journey through the tunnel to the Eyrie locker room to face Biggleswade FC, far from home. ! St Neots Town makes the trip on New Years Day.

In April, as the season draws to a close, the Eagles host AFC Dunstable on Easter Saturday, before heading to St Neots on Easter Monday (April 18). The fixtures will end on Saturday 23 April at home against Aylesbury United.

The semi-finals of the play-offs will take place on Wednesday April 27 and the final on Monday May 2.

Defender Joe Steele, 24, who has made 43 appearances, originally joined in 2018 from Arlesey Town.

Speaking to www.bedfordeagles.net, manager Gary Setchell said: “I’m glad Joe is back for another season at the Eyrie. He works hard and is a solid defender, who is always eager to learn his game.

With six appearances since arriving from Yaxley in October 2020, Charley Sanders, is either a forward or a defender.

Setchell added: “I have known Charley for a long time. He’s a hard worker and a great, strong player who causes problems at both ends of the pitch.

Full-back Niall Jones, 20, has been with Potton United before and is a boy from Bedford who now plays for his hometown club.

Setchell said: “Niall has impressed throughout the preseason since his trial. He’s a versatile player, who has a great pace of work for a young player. I can’t wait to see him get involved in the as the season progresses.

Craig Mackail-Smith is staying at the Eyrie for another year. The prolific soccer league striker signed for the club in September 2020.

Mackail-Smith, who made 185 appearances with 80 goals for Peterborough United, also played for Brighton and Hove Albion and Luton Town.

“Having Craig at the club brings so much on and off the pitch,” Setchell said. “He’s an energetic and fit person who passes his experience on to the younger members of the team. We are all delighted that he is involved again.

The Eagles continue their preseason games by hosting Wealdstone on Saturday (1pm) before a trip to Potton United on Tuesday (7.45pm).