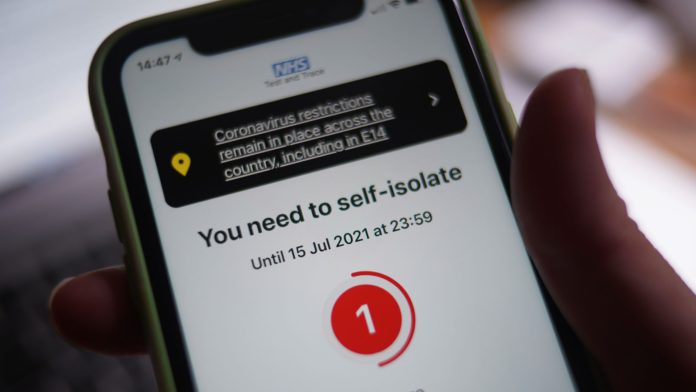 A record 618,903 people in England and Wales have been slashed by the NHS COVID-19 app in a week, according to the latest figures.

Alerts were sent to app users in the week leading up to July 14, telling them that they had been in close contact with someone who tested positive for the coronavirus and needed to self-isolate.

Around 428,000 additional people were contacted by NHS Test and Trace contact tracers in England and were invited to
self-isolate in the week to July 14, according to the latest figures – about 90% of the 475,465 people identified as close contacts of COVID cases.

This is the first set of numbers since the majority of restrictions were lifted in England last Monday.

Many experts have predicted that easing regulations will lead to an increase in cases as the virus spreads rapidly through the unvaccinated population, which currently stands at 12% of adults and almost all the children in England.

On Tuesday it was revealed that over a million children in England were out of school last week for reasons related to the coronavirus.

While nearly seven in 10 adults enjoy the protection of two jabs, currently all must self-isolate if requested by the NHS Test and Trace.

And Tuesday, Downing Street said it was “crucial” for people to isolate themselves when they are pinged by the NHS COVID app.

Speaking to Kay Burley on Thursday, Kwasi Kwarteng said the government was “very concerned” on the number of people surveyed by the NHS app.

Mr Kwarteng said ministers “are monitoring” the situation and will draw up a list of critical exempt workers “very soon”, hoping it will be released on Thursday.

The aftermath of what has come to be dubbed the recent “pingemia” has been reports of empty shelves in some supermarkets, unmanned businesses and delays in supply …