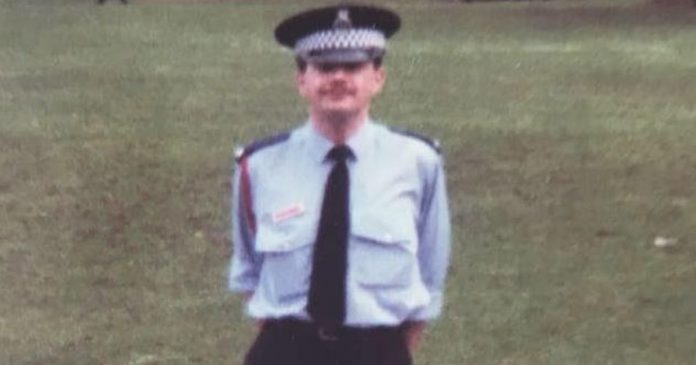 The widow of a police officer who was brutally murdered while doing the job he loved paid tribute to the man behind the uniform.

Northumbria Police Officer Bill Forth was responding to a 999 call in Gateshead when he was brutally attacked in March 1993.

The sergeant and a co-worker were called in to settle a marital dispute over a report of a broken window in Clover Hill, Sunniside, when he ran into a crazed Paul Weddle.

While under the influence of alcohol and tranquilizers, Weddle, then 26, beat the father of two with palisades from a fence before stabbing him in the heart, lungs and limbs. kidneys.

The 34-year-old man died from his injuries from the brutal attack despite efforts to save him.

Now, 28 years later, Sgt Forth is one of the deceased heroes remembered in a moving ceremony to mark the official unveiling of the National Police Memorial at the National Arboretum in Staffordshire.

Paying tribute to her husband for 13 years, Gill Merrin described him as a “family man” and a “great dad”.

She said: “Bill was a fantastic cop, he made the ultimate sacrifice and people need to know the enormity of this event and the impact it has had on us as a family.

“He always wanted to be an officer, but when we first met he was training to be a teacher. We talked at length about the goals we wanted to achieve, and I actually encouraged him to follow his dream and become an officer. .

“He was born and raised in Fence Houses, so it would always be the Northumbria Police for him.

“He loved the job and before his death he was working to become an inspector.

“He knew the law inside and out and was very excited and motivated to do the right thing.

“He loved upholding the law and wanted to make sure people were treated the way they should be, no matter who they were or which side of the law they belonged to.

“He absolutely loved his coworkers and I remember the times he took his guitar to work – he was really musical and loved to be entertained.

“He was so much more than a police officer, he was a family man, a great father.”

The officer joined the Northumbria force in 1979 and served in Sunderland.

He was promoted to sergeant in 1989 and was subsequently seconded to the Aykley Heads District Training Center in Durham.

Upon his return to Northumbria, he served in areas such as Felling and Whickham, in Gateshead.

Shortly before his tragic death, Sgt Forth was commended by a judge for his bravery as he faced two gunmen.

In 1994, Weddle and Philip English, then only 15, who was also at the scene of the attack, were convicted of the murder of Sergeant Forth.

However, English’s conviction was later overturned after a court heard he was 100 yards away and handcuffed when Sergeant Forth was fatally injured by his co-accused.

After losing Bill in such traumatic circumstances, Gill became a strong advocate for police safety and even filed a petition in Downing Street, meeting with then Home Secretary Michael Howard and calling for protective vests are available in all forces across the country.

And the following year, she got her wish.

“I have a lot of time and respect for what the police do and for their role in society,” she said.

“Some people forget that there is one person in uniform who has a life and a family – they just see the authority that the uniform represents.

“It’s easy to reflect on my experience now, but back then it was so hard to keep my emotions together and so frustrating not being able to express how I was feeling.

“I don’t think this raw heartache will ever go away, but luckily our situation doesn’t happen to many families.”

Gill has since moved from the North East to become a counselor, channeling her own lived experience to help others grieve and overcome their obstacles.

She will attend the memorial in the days following the opening ceremony, for a special service organized by the charity Care of Police Survivors (COPS).

To learn more about the National Memorial, visit www.ukpolicememorial.com.