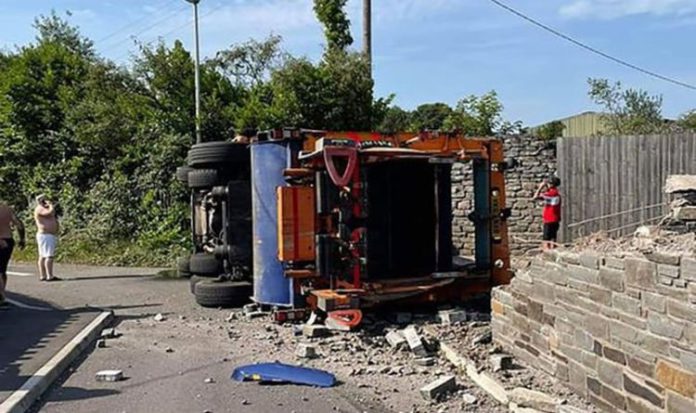 Police arrested a 17-year-old man after the garbage truck collided with a canal wall at Briton Ferry in south Wales. It is alleged that teenagers took the vehicle when it was parked as crews took a lunch break on Thursday.

Residents of the peaceful town expressed their horror at the accident which left the truck on its side next to the rubble.

Julie Evans, who lives nearby, told Wales Online: She was at home when she heard “a huge bang”.

“I thought a house had blown up. I knew something bad had happened.”

She said she saw young men who appeared to be injured exiting the truck and then fleeing the scene.

Officers made an arrest but believe two other youths fled the scene on foot.

“It is believed that two others fled the scene on foot.

“Investigations are underway to establish their identity. “

Neath Port Talbot’s council, which is a Labor stronghold, is helping police with the investigation.

A spokesperson for the authority said: “Neath Port Talbot Council is helping South Wales Police, Central and West Wales Fire Brigade and the Health and Safety Executive to investigate an accident involving one of his garbage vehicles that occurred after the crew parked it for a break.

“Shortly after leaving the vehicle on the morning of Thursday July 22, it drove along Brynhyfryd Road, Briton Ferry and then collided with a canal wall at Giant’s Grave Road, Briton Ferry. It is understood that three young people were involved in the incident and the South Wales Police investigation into the case is continuing. “