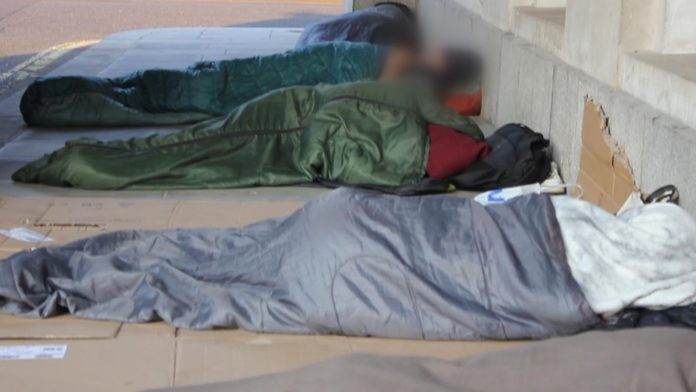 Florian Hasalla wakes up at 6:45 am – the first in a line of sleeping bags next to a building near the Savoy Hotel in London.

He packs the cardboard box he used as a mattress – hides his sleeping bag in a wheelie bin and heads to Charing Cross station to use the bathroom to make himself respectable for work.

At 8 am, he is at a construction site next to Buckingham Palace where he drags rubble on scaffolding; a homeless man helping renovate some of London’s most expensive properties.

While the number of rough sleepers is expected to increase in the wake of the pandemic, charities say Florian is part of a sub-sector of our economy that is expected to grow – the working homeless people – the economy of cardboard.

“I don’t wish that on anyone,” said Florian. “It’s hard. Because you fight. You fight with the wind, and early in the morning it’s so cold that this sleeping bag can’t save you.

“And if it rains, it can rain anytime. People drunk at night, bad guys might come and kick you.”

No one on Florian’s site knows his situation.

He said: “The lockdown happened and then it was all canceled and from there I ended up homeless because I wasn’t getting enough money.

“I messed up the rent. And to be very honest I started drinking a little bit, which I’m not really a drinker but because I was staying home a lot, the depression started and stuff and I lost the place and came to London for a fresh start and, even with the job now, I can’t make a fresh start. “

The latest figures show that around 75,000, or a quarter of households in England that are either homeless or at risk of becoming homeless, also manage to work.

Sleepers in the street, people in tents or in temporary accommodation try to cling to normality by clinging to their work.

But charities fear that number will rise as people fall …