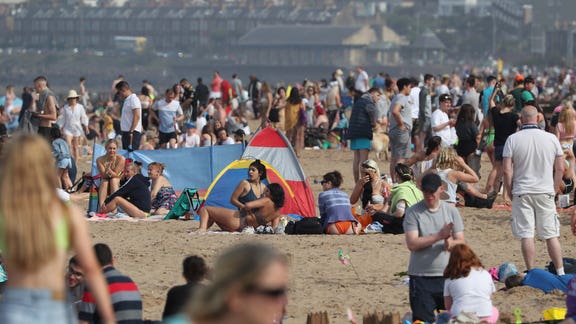 The British are being warned to prepare for temperatures above 40 ° C during the summer months by the UK’s leading meteorologists.

The UK is starting to see increasingly extreme temperatures and that is unlikely to change, even if humanity is able to limit global warming to 1.5 ° C.

Beaches, parks and other public spaces were crowded as the British enjoyed scorching heat with highs of 32C.

Health experts have urged people to spend time in the shade, drink plenty of water, and stop walking their dogs.

2020 was the third warmest, fifth wettest and eighth sunniest year on record – the first to make the top 10 for all three variables.

Professor Liz Bentley, chief executive of the Royal Meteorological Society, said the world is already experiencing extreme heat due to a warming of 1.1 ° C to 1.2 ° C above pre-industrial levels.

“If you increase that by 0.3 ° C those (heat waves) are just going to get a lot more intense – we’ll probably see 40 ° C in the UK although we’ve never seen those kinds of temperatures (before) “she said. .

Mike Kendon, a climate scientist at the Met Office and lead author of the report, said the numbers indicated a new normal for the UK.

“In seven of the last 10 years we have seen temperatures of 34 ° C in the UK compared to seven of the previous 50 years,” he said.

“So this is an indication that our baseline of our climate is changing and what we consider normal is changing.”

He added that man-made global warming will last “a long, long time to come” with scientists at the Met Office’s National Climate Information Center “blown away” by the extreme heat seen in Canada in recent weeks.

Staggering 49.6 ° C temperatures observed on the west coast of Canada.

He added: “An event like this would be practically impossible without the influence of man-made warming, it is obviously a very serious impact.”

Review: Gerry Cinnamon is a fixture at the Brighton Center Brighton News