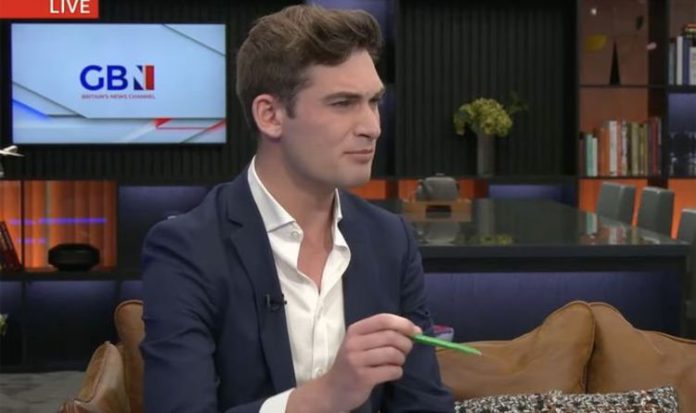 A heated argument broke out on GB News after host Tom Harwood called out actor Laurence Fox about his stance on Covid vaccines. Mr Fox made a series of controversial statements during the channel interview, as he suggested it was “selfish” to get the vaccine. Mr Harwood responded to the remarks, urging Mr Fox to tell his “legions of followers to get the jab.”

Mr Fox said: “The fear this government has generated is absolutely out of proportion to the risk this virus poses particularly to young people.

“I’m trying to bring these two sides together, no further.”

Mr Harwood fired back: “Are you trying to put these parts together, though?

“I saw your vaccine tweets, you used the vaccine in quotes like it wasn’t a real vaccine.

“You said they had failed their trials when they had passed their Phase 3 clinical trials.”

JUST IN: Anti-vaxxer urges Britons to get bitten after nearly dying with Covid

“Are you not part of the problem here?”

Mr Fox joked: “Do I also have to get a Tom Harwood tweet approval passport? Should that help?”

He added, “I feel for you because as a young person you worry disproportionately about this thing that won’t do you any harm.

“You keep following the government’s line.”

Mr Harwood chided the actor-turned-activist: “I have been deeply critical of this government.

“They took a long time to introduce the masks, they slowed down the deployment of vaccines and they were weak at the border.

It comes amid a slowdown in vaccine uptake in the UK, especially among young people.

Government ministers have admitted that they are considering using the threat of national vaccine passports “to coax and coax” people into being fully immunized.

Foreign Minister Dominic Raab told the BBC that requiring certification of the coronavirus to participate in society has led to a “huge increase” in vaccinations in France.

Last week Boris Johnson announced that documentation would be mandatory for those gathering in crowded indoor venues across England from the end of September.