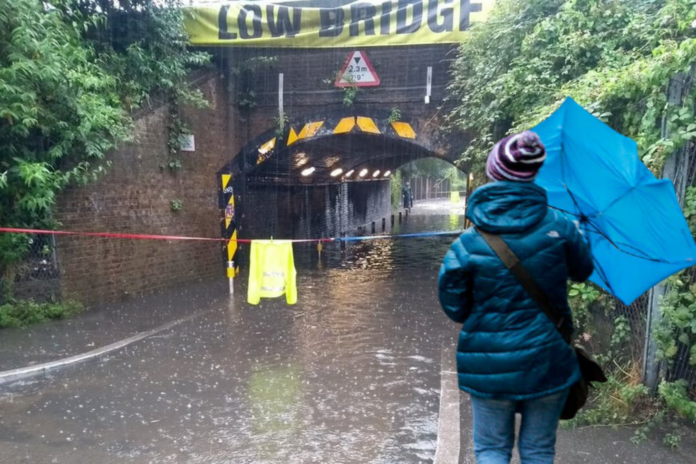 The 75 mph winds and high winds expected to hit the UK have been officially named Storm Evert by the Met Office.

The Met Office said the newly named storm will bring “strong winds and heavy rain for the season.”

Warnings are in place for parts of southern England and Wales, with warnings of possible infrastructure damage and travel disruption.

After a scorching heatwave with temperatures reaching 30C at the start of the month, thunderstorms hit parts of the UK, dashing hopes of a sunny start to the summer school holidays.

Forecasters announced Evert as the name of the storm Thursday morning, advising the public to be “aware of the weather” before its scheduled arrival later today and Friday.

# StormEvert has been appointed and is expected to bring unusually strong winds for the season and heavy rain to the south of the UK later today and through Friday #weather report pic.twitter.com/O75aWu2iLd

They predicted that some coastal and hilly areas would see wind gusts of between 45 mph and 55 mph, reaching gusts of 65 to 75 mph across Cornwall.

Storm Evert’s name comes on the day the government announced that more than £ 860million is to be invested in flood prevention programs across the UK over the next year.

More than £ 860million is to be invested in flood prevention programs across the UK over the next year, the government said.

The plan, which will benefit more than 1,000 local projects and help protect homes and businesses, is part of the Coastal Erosion Investment Plan released Thursday.

It comes as heavy downpours hit the country, causing disruption from Scotland to London, with the Met Office putting yellow and orange weather warnings in place.

The Ministry of Environment, Food and Rural Affairs (Defra) said the “record investment” would better protect 336,000 properties and reduce the national flood risk by up to 11% by 2027.

Environment Secretary George Eustice said: “The recent tragic events in Germany and Belgium remind us of how devastating floods can be.

“It’s important that we take action across the system.

“Our comprehensive plan will achieve this by tightening planning procedures, helping more people access insurance and making homes more resilient to the effects of flooding.”

Communities Secretary Robert Jenrick said: “Flooding is having a devastating impact on people’s lives and that is why we are stepping up our guidance to ensure measures are in place to protect our homes and businesses from the risk. flood.

“Our planning reforms will ensure communities across the country know that future developments will be safe from flooding.

“These new guidelines will help local communities become more resilient to flooding by providing local authorities with the right tools to consider how to prevent flood risks when planning new homes.”