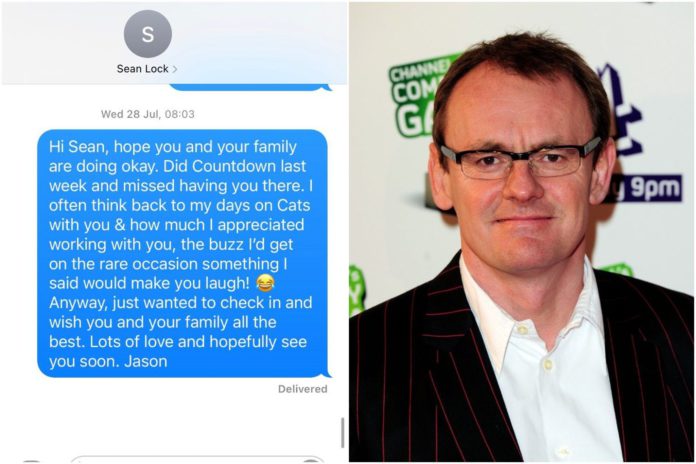 He urged people to check on their friends who they haven’t spoken with for a long time, as this could “be the last time.”

He would say, “Hi Sean, I hope you and your family are doing well. Did you miss the countdown to last week.

Born in Woking, Surrey, Lock left school in the early 1980s and began working on construction sites, but developed skin cancer, which he blamed on overexposure to the sun. He made a full recovery and focused on a career in acting.

One of his first professional television appearances was in 1993, alongside Rob Newman and David Baddiel on their TV show Newman And Baddiel In Pieces.

He scripted the 1998 BBC Two series Is It Bill Bailey? and had his own show on BBC Radio 4 called 15 Minutes Of Misery, which was later extended to 15 Storeys High.

The show was set in a tower and centered around a pessimistic character called Vince (played by Lock) and his roommate Errol (Benedict Wong).

Between 2006 and 2007, he hosted the Heaven TV series, Telly Hell on Channel 4, in which he invited celebrities to share their own selection of television triumphs and tragedies.

Lock has also appeared on panels including Have I Got News for You, QI, and They Think It’s All Over.

IQ host Stephen Fry said, “I think it’s safe to say that the best IQ episodes I’ve been on have always been the ones where Sean Lock was a guest.”

A tweet from Fry added, “Such a complete shine in every direction of the comic. What a loss. My heart goes out to his family.

In 2000, Lock, who was also a husband and father of three, won the gong for best stand-up at the British Comedy Awards.

Strictly a winner and comedy star, Bailey told BBC Radio 5 Live: “This is a devastating loss, personally and to the comedy.

“He was my dearest friend and we’ve known each other for over 30 years and we know he’s been sick for some time, but it’s still a shock when the day comes.”