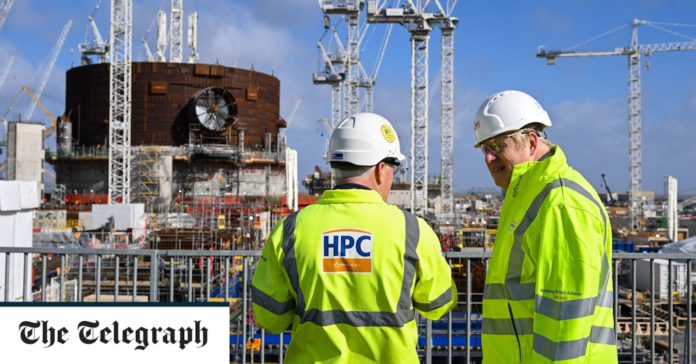 The approval time for an offshore wind farm will also be reduced from four years to one year, in particular by setting up a fast-track authorization route.

National policy statements, which help the Secretary of State decide on infrastructure applications of national significance and may also affect local planning decisions, will be strengthened to “reflect the importance of energy and net zero.” “.

Environmental ‘offset’ measures will be introduced to reduce delays to offshore wind projects by allowing developers to offset, rather than eliminate, environmental effects such as danger to wildlife, while approvals for oil projects and gas will also be accelerated.

Changes to planning rules are key to accelerating energy projects, but risk sparking tensions with local communities and Tory MPs.

Several backbench MPs have already raised concerns about the potential fivefold increase in solar panels, while a major offshore wind farm development was recently temporarily halted by a judicial review by a local campaigner.

Rebecca Windemer, senior lecturer at the University of the West of England, Bristol, said: “When the government is looking to speed up our planning system, it needs to ensure there is very strong community engagement. early.”

Katie-Jo Luxton of the Royal Society for the Protection of Birds, said: “We are already seeing the dangers of taking the fastest option with developers and planners overlooking the potential damage to wildlife and destruction of spaces. wild on land and at sea.

“Once again, the government has again avoided committing to a cohesive spatial plan to map both energy reduction and clean energy protection.”

It comes as the government seeks to encourage the deployment of nearby onshore wind power plants by reducing bills for people living nearby – a step deemed “retrograde” by some campaigners.

Tom Fyans, director of campaigns and policy at CPRE, the rural charity, said: “Subsidized energy bills for communities living near solar or wind farms are a regressive step – good proposals don’t Any suggestion that communities are being bribed into accepting otherwise inappropriate development could seriously damage confidence in the planning system.

Bob Blackman, Tory MP for Harrow East and member of the local government select committee, said he thought communities were unlikely to buy into it and the relaxation of planning rules was a potential source of conflict.

“We have to see the devil in the details and what local people can consent to.”

John Hayes, the former energy secretary and Conservative MP for South Holland and the Deepings in Lincolnshire, said the government’s strategy was “welcome in its focus on how we can deliver our energy independently “, but added: “Apart from people with an election death wish I can not imagine that many people supporting industrial wind farms are spoiling our green and pleasant earth.