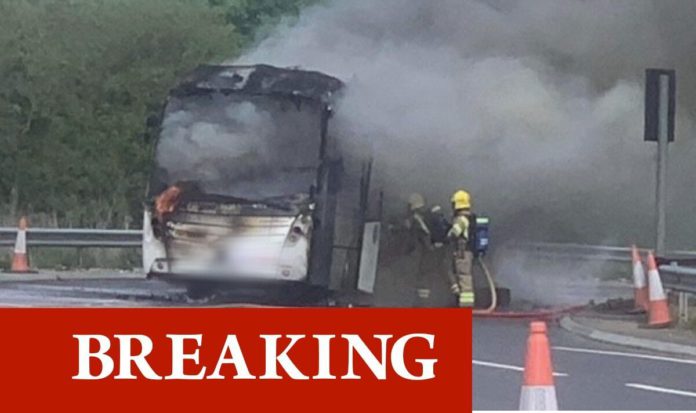 The westbound exit ramp at Junction 15 was closed for emergency repairs after the road surface was badly damaged by the coach fire.

It is understood that everyone on the coach left the vehicle safely.

The ramp has been closed for about 3 p.m.

All four lanes of the freeway were originally closed but have now reopened.

In an update, the INRIX Traffic Department said: “The M4 Westbound exit slip road has been closed due to a coach fire at J15 A346 Marlborough Road (Swindon East).

“The exit slip road has remained closed since 2.55pm, The M4 had been held briefly to allow police to clear traffic stuck on the exit slip road, all lanes have reopened on the main road.”

He said: ‘The coach fire at Junction 15 appears to be out and construction of safe traffic from all angles is to be avoided.

Dorset and Wiltshire Fire Services urged drivers to use alternative routes in a tweet at 3.30pm.

He said: “We are currently dealing with a vehicle fire on the westbound M4 near J15.

“It’s impacting local traffic, so take an alternate route if you can.”