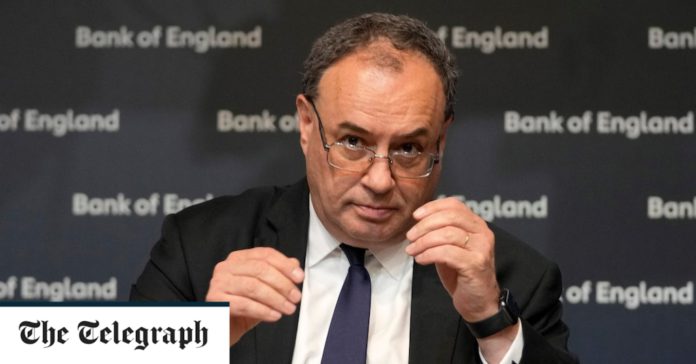 Andrew Bailey faces questions over his leadership in the House of Commons on Monday as Tory backbenchers lash out at the Governor of the Bank of England over the cost of living crisis.

Tory MPs on the Treasury Select Committee are expected to ask why the Bank allowed inflation to soar to 30-year highs of 7% after repeatedly insisting that price hikes were “transient”.

Kevin Hollingrake, a Tory Treasury committee MP, said: ‘If there are problems in an organization you have to go to management.

“These are the questions people are going to ask: has the Governor of the Bank of England got it right?”

The criticism comes as the Conservative Party trails Labor in the polls. The party has lost its lead on the economy following a series of tax raids as household budgets are squeezed by soaring costs.

It has long been “obvious that inflation was not going to stop at 5% or 6%, it was going to continue”, Mr Hollingrake said, given pressures in energy markets, commodity prices materials and wages.

He added: “You could easily say they were slow to act.”

Harriett Baldwin, another member of the Committee, said the Bank had missed the first signs of the coming rise in prices and was “wrong to expect the spike in inflation to be temporary and to dissipate quickly”. .

Warning that the lessons of the high inflation of the 1980s and 1990s appear to have been forgotten, she said: “Central banks, collectively, had become complacent in the face of inflationary pressures.”

Bank officials have argued that much of the current price spike is coming from global energy markets and the war in Ukraine, as well as congested international supply chains, interest rates higher can hardly fight.

However, they raised interest rates from 0.1pc in December to 1pc now and are expected to go further as they seek to prevent inflation from taking root in the economy.

Mel Stride, Conservative chairman of the Treasury committee, said the Bank “can’t do anything about high energy costs” but still has questions to answer.

He said: “I have argued for some time that there is an emerging threat of a price-wage spiral, which may indeed be taking off.

“Monetary policy plays a central role in anchoring future inflation expectations and can have a decisive impact on wage negotiations.

“My personal view is that this is the part of the table where the Monetary Policy Committee has the most questions to answer.

“Have they understood their judgment on wages and the labor market? Or were they too slow to understand what was going on?