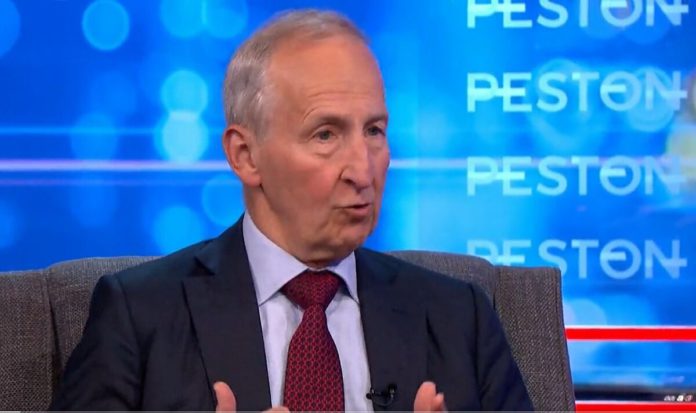 Former national security adviser Lord Ricketts spoke at length about Boris Johnson and Simon Case to Robert Peston on ITV on Wednesday night. The senior British civil servant was clinging to his job on Wednesday night after being accused in Sue Gray’s Partygate report of overseeing a culture of rule-breaking in Number 10.

Simon Case, the Cabinet Secretary, has refused to resign after the Whitehall enforcer ripped Downing Street management for hosting and attending drunken rallies.

Boris Johnson has decided to stand by his most senior official, who told him before Sue Gray’s report was published that he would not step down and would have to be pushed.

Speaking of Mr Johnson, the former national security adviser said: ‘The tone and culture of No 10 is set by the person at the top, so every Prime Minister gets the type of No 10 that he wants to reflect his style.

“First and foremost it is Boris Johnson’s fault, but the leadership of the civil service also has a huge responsibility.”

On Wednesday afternoon, Mr Case wrote to staff saying lessons had been learned from Partygate and that they ‘must remain fully focused on service to government’.

The letter, seen as a call to get out of the scandal, was poorly received by some officials, who called it tone deaf and a “shame”.

It came after Ms Gray appeared to suggest junior Downing Street staff, who bore the brunt of police fines, had been suspended by their bosses.

She said the centre’s “senior leaders, both political and official, must take responsibility for this culture” of breaking the rules in Number 10.

She wrote: “It is important to thank those in the most junior positions who attended rallies where their superiors were present or even organized.

“It is also true that some of the more junior officials thought their attendance at some of these events was permissible given the presence of senior leaders.”

Expressing his opinion, Mr Ricketts said: ‘If it was me I would have resigned by now because I think to read this language and realize that I was responsible and in charge, I don’t think I would have could stay.

“But it’s quite difficult to say that the Prime Minister, who says he takes full responsibility, does not resign and that the civil servant who works for him does.

DO NOT MISS :
Monkeypox hysteria is a ‘coronavirus-inspired overreaction’
Brexit LIVE: ‘Not what we voted for’, points out furious Farage
Russian forces make ‘additional gains’