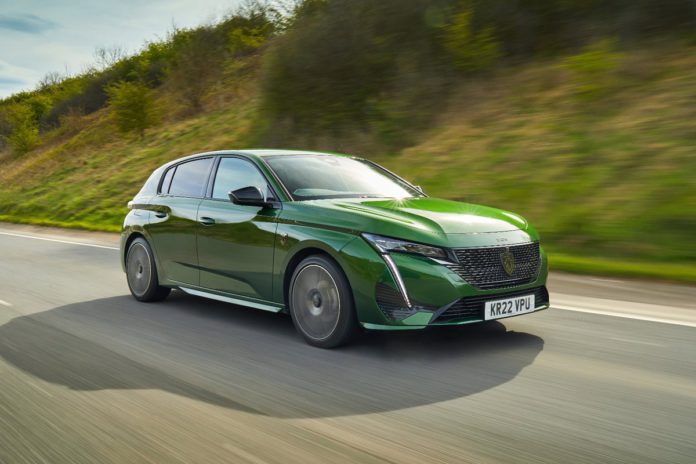 Peugeot’s new 308 won’t appear on our roads until the end of the year, but, judging by our early drive in the hatchback and estate versions, it’ll be worth the wait.

The third generation of the Peugeot 308 is the first to feature the brand’s new roaring lion’s head logo – replacing the old full animal – and it will have a plug-in hybrid option for the first time.

If the new 308, in sedan and SW break versions, is a sample of what’s to come, then we’re in for a treat.

The designers have done a brilliant job of combining sharp angles with sweeping curves to create one of the best looking new cars to come out of lockdown.

From the outside, the car is a smart addition to the landscape, especially in the olivine green paintwork of the test car shown, one of seven spectacular color options on offer.

It has flowing lines, with the bonnet sloping down to a low nose with a new larger grille below. Ultra-thin headlights are incorporated into the sides of the grille, alongside the fang-shaped LED daytime running lights. The new logo in the center of the grille hides the radar sensor.

The rear view is also very good with a tidy, rounded Alfa-like rear with a spoiler above the screen and dramatic three-claw LED taillights.

Enter and there the view changes to a geometric view with sharp corners in a trapezoidal theme.

The result is a superbly sleek look across the width of the car’s dashboard that exudes clean efficiency.

For the driver, the 10-inch digital, eye-level instrument cluster gives clear information and in the case of the GT test car it’s a 3D display which might be overly complicated but is superbly clean and concise.

It has several modes that can be configured and customized for TomTom navigation, media sources, safety driving aids and power flow.

At its heart is the Peugeot brand iCockpit with its small multi-function steering wheel, which includes sensors to detect the driver’s grip levels when using driving aids, and fingertip controls to radio, media and telephone.

The air vents are positioned high on the dashboard, which means that the central touchscreen, slightly lower than the digital cluster, is closer to the line of the driver’s hands and eyes.

Higher grades come with configurable virtual i-toggles next to the center display which are touch sensitive for a shortcut to various functions including climate control and phone contacts and to launch an app and avoid having to scroll a menu.

The voice control system uses voice recognition for hands-free access to many functions, although I had trouble with the “OK Peugeot” command, but that could have been because the test car was one of the first to arrive from the factory, with speedo set to kilometers per hour and satnav directions in French.

The air conditioning constantly monitors the quality of the air entering the cabin and top-of-the-range models have an air treatment system that automatically filters polluting gases and particles.

The design, technology and finish of the interior all come together for a superb working environment for the driver and, as it is longer and lower than before, there is also more legroom for those at the back.

There are five trim levels and four power options – two plug-in hybrids, a 1.2-litre petrol engine – which was in the car shown – and a 1.5-litre diesel.

On the road the car has excellent stance and feels much more meaningful than the outgoing model and although the test car’s three-cylinder petrol engine was remarkably capable, it seemed surprisingly noisy at low speeds when more of punch was requested.

It felt fully confident on the road, and the eight-speed automatic was a delight.

Aerodynamics figured heavily in the design of the new car. The entire body, such as the bumpers, body pillars, exterior mirrors, extended roof spoiler and even the wheels, has been designed to improve airflow.

The trunk has a useful capacity of 412 liters, with 28 liters of storage in a compartment hidden under the floor. With the rear seats folded flat, that increases to 1,323 litres.

The SW model has more boot space – the standard model comes with a 608-litre boot, while the hybrid has 548 litres.

I drove a 1.5-litre four-cylinder diesel version of the estate with 129 hp and 221 lb-ft of useful torque and although it was slightly slower than the 1.2-litre three-cylinder petrol GT hatch litre, there’s the bonus of impressive economy in the 60s mpg, making it attractive as a family workhorse.

There will be two plug-in hybrids, one combining a 148hp PureTech petrol engine with a 109hp electric motor and 12.4kWh battery offering 37 miles of pure electric operation. The other is larger with a 178hp petrol engine with the same electric motor and battery range but slightly faster acceleration and top speed. Charging at home from a three-prong outlet should take about seven hours, while that time is halved with a wallbox. With the optional 7.4kW on-board charger that cuts that even further to just under two hours. There should be a full electric version next year.

A thermal preconditioning function is available with plug-in hybrids. Using the MyPeugeot smartphone app or the car’s touchscreen, owners can program a battery wake-up time so the cells are at the best temperature for efficiency from start-up, while the cabin can be preheated or cooled.

The new 308 is available to order from retailers and online with first deliveries expected around December.

It’s a competitive sector of the market with alternatives like the VW Golf, Ford Focus, Vauxhall Astra or Seat Leon but 308 buyers will be attracted by excellent residual values ​​when they come to trade in their car or replace it on their PCP contract.

However, I suspect that many will decide to keep their car a little longer. It’s a hatchback or SW bodystyle look inside and out and has all the smart technology you need, so why would you want to change?