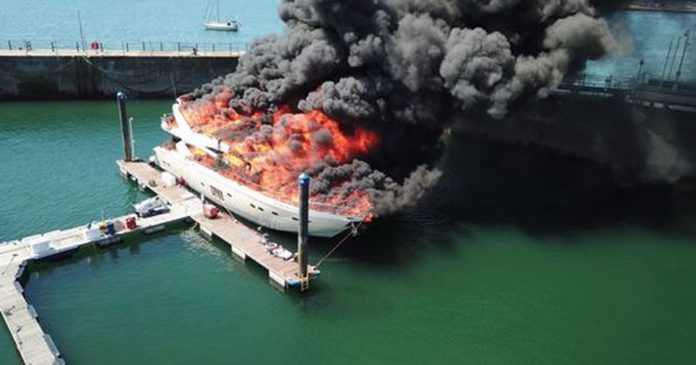 A ‘superyacht’ caught fire in a Westcountry harbor today.

Three fire engines for the Devon and Somerset Fire and Rescue Service are at the scene of the blaze in Torquay today (May 28).

Devon Live reports that firefighters have confirmed they are battling a major blaze which engulfed a ‘posh yacht’. According to a spokesman for the Devon and Somerset Fire and Rescue Service, firefighters were called at around 11.57am.

Follow updates on the incident on Devon Live’s blog here.

A spokesman said: “The 85ft motorboat is on fire. Firefighters called at 11.57am. Three fire engines at scene. Liaison with Harbor Master.”

An eyewitness in the area said: ‘A massive fire near Pavilion I think in Torquay Harborside.

The smoke is visible for miles around and the incident has resulted in the closure of roads in the area. Plumes of thick black smoke can be seen billowing from the yacht.

Speaking to Devon Live, an eyewitness at the scene said: “It started 15 minutes ago along the pontoon. There were explosions.

“The ropes burned and he drifted into the pier. Firefighters took carts and pumps along the pontoons but the water did not reach.

“Some people are stuck at the other end of the pier and can’t get back. Firefighters are running along the pier. Still huge flames.”