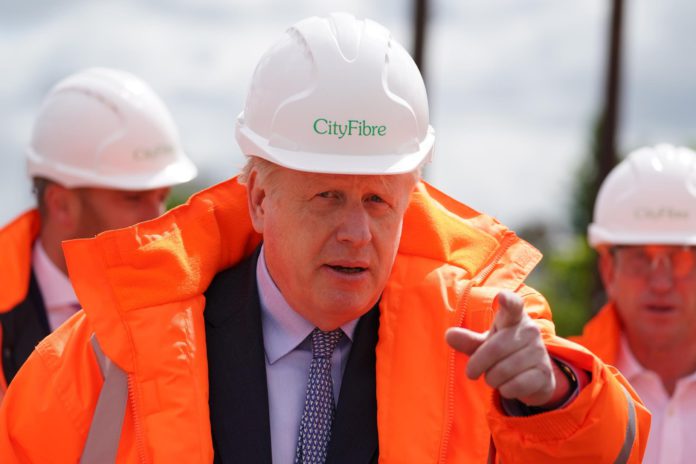 Boris Johnson has said the government’s emergency cost-of-living support package is a “big bazooka” that will support families until soaring energy prices abate.

The Prime Minister acknowledged the country still faces a ‘bumpy time’ due to soaring oil and gas prices, but said he was confident it would emerge in a ‘much, much stronger position’ .

Earlier, Chancellor Rishi Sunak – who on Thursday announced an additional £21billion in household support – indicated he could not rule out the need for further measures if global prices remained high.

But speaking during a visit to Stockton-on-Tees, Mr Johnson appeared to suggest the measures set out in the Commons – with up to £1,200 for eight million homes across the country – should be enough.

“What we’re doing now is making sure we’re supporting people through tough times. It’s a big bazooka,” he said in a clip pooled for broadcasters.

“I’m not going to pretend that it’s going to fix everything for everyone immediately. There will still be pressure.

“But it’s a very, very substantial commitment from the government to help us through what will be yet another turbulent time with rising energy prices around the world.

“What I think that will also help us do is push us through until I think prices start to come down and we’re in a much, much stronger position.”

While some Tories have welcomed the Chancellor’s latest support package, others have expressed concern that it will be partly funded by a £5bn levy on the profits of energy companies.

With Labor pushing for a windfall tax for months, MPs complained it was ‘throwing red meat at Socialists’ and hurting investment in the sector.

There were also fears that a £400 cut in the energy bills of every household in the country, regardless of their standard of living, could further fuel inflation which is already heading towards 10%.

Paul Johnson, director of the Institute for Fiscal Studies, said that while the impact of a series of one-off measures would be limited, the chancellor could come under pressure to repeat it in years to come.

“I think the biggest risk here is that the Chancellor will be tempted to do it again and again. If that happens we could really be in for some trouble,” he told BBC Radio 4 Today.

“He has the most extraordinarily difficult decisions to make later this year on public sector wages, and then he will be under pressure, I guess, around this time next year – when energy prices are still high and that households will find it difficult – to save more money.

Mr Sunak insisted he remained a ‘fiscal conservative’ and pledged to manage public finances ‘responsibly’, but he refused to rule out another contingency plan next year .

“People can judge me on how I’ve acted for the past two years,” he told the Today show.

“I have always been ready to react to the situation on the ground, what is happening to the economy, what families are going through and to make sure that we have policies in place to support them through this. .

“I want people to be reassured and confident that we are going to get through this. We will be able to fight and reduce inflation, we have the tools at our disposal, and after a while it will come back.

Shadow Labor Chancellor Rachel Reeves said the Government had ‘finally come to their senses’ over the windfall tax, but said ministers needed to consider steps to ensure they don’t would not be in the same position next year.

“The government could launch a big home insulation program right now to cut people’s bills – not just for a year but for years to come,” she told BBC Breakfast.

Under Mr Sunak’s plan, almost all of the eight million most vulnerable households could receive at least £1,200 in aid, including a previously announced £150 council tax refund.

The measures include a one-time payment of £650 to low-income households on benefits, paid in two installments in July and the autumn, at a cost of £5.4billion.

Pensioners will also receive a £300 payment in November/December alongside winter fuel payments in a move costing £2.5billion, while £150 will be paid out by September to those receiving disability benefits .

Mr Sunak said £5bn of the package would be paid for by a takedown of oil and gas giants’ profits, and around £10bn would be covered by additional borrowing.

Announcing the measures in the Commons, Mr Sunak told MPs…