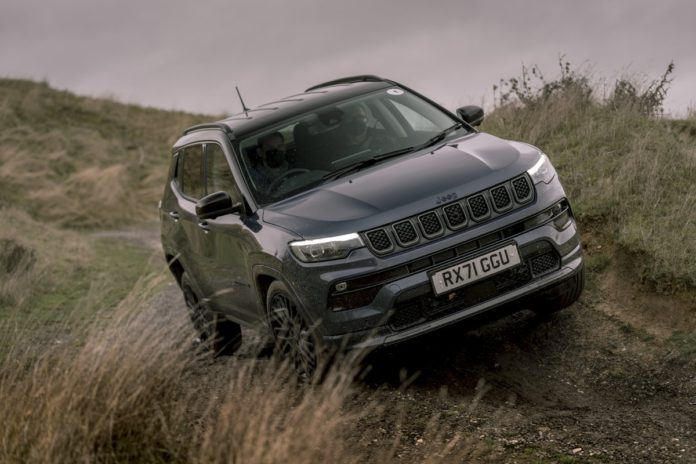 The Jeep Wrangler was one of my favorite cars from last year.

It was a shameless throwback to the models that made the brand and kind of car you buy with your heart, not your head.

But to sustain this niche model in markets like the UK, Jeep needs to sell more trendy products – simple family fare with tax-efficient engines and 21st century toys. Cars like the Compass.

Unlike the smaller B-SUVs, this segment is mostly about blending in, so the styling of the Compass is quite simple, with the usual tall, slightly boxy shape that can trace back to the old Jeep Grand Cherokee. At least the spec of our test car livened things up a bit and actually looked really mean, brooding and pretty cool with dark blue paint, shiny black trim and a subtle blue background on the badging for showcase its hybrid credentials.

Because, yes, despite Jeep’s famous penchant for V6s and V8s, this little model is a plug-in hybrid affair with a tiny 1.3-liter gasoline engine.

Despite its small capacity, in tandem with the 44kW electric motor, the Jeep produces 237bhp and it feels suitably sprightly. The EV motor guarantees instant response when you need it and the petrol helps to pull the car well, although under hard acceleration it’s clear that this is a small motor that works very hard.

In the Compass, the EV motor drives the rear wheels, while the petrol handles the fronts, enabling all-wheel drive. Perhaps to reflect Jeep’s heritage you can lock it in 4WD and there’s even a low gear transmission lock alongside drive modes for sand, snow and mud – something that is not offered by any rival.

In operation, the hybrid system is as unremarkable as any rival. Auto mode handles its operation well but there are EV and battery saving modes if you prefer to control things yourself. Transitioning between modes is pretty smooth, with the screaming engine being the most obvious giveaway.

Over a week of varied riding and with a steady charge, the Compass reported around 60 mpg. That’s less than the Ford Kuga, but broadly similar to our results of other similarly sized PHEVs. Ride it with a dead battery for any length of time and, like your rivals, you’ll see that dip at best into the mid-40s.

Lane assist is overly sensitive and imprecise and can’t be completely turned off – you’re left with the nagging vibration even after you stop trying to pull yourself all over the road. Worse still, the forward collision warning is frighteningly paranoid and even in its least sensitive setting starts screaming at you almost the minute everything in front starts to slow down.

Euro NCAP rates cars if they don’t have such systems, but in Jeep’s case, it would really need to be offered extra points for getting rid of its ADAS.

Aside from this detestable technology, the compass is largely unremarkable. Its look is a straight SUV, and so is the driving experience. The hybrid setup performs as well as most rivals and the ride is decent, but it doesn’t do anything to stand out. With rivals like the Toyota Rav4/Suzuki Across and the new Sportage PHEV impressive in performance and design, the Compass seems to lack direction.