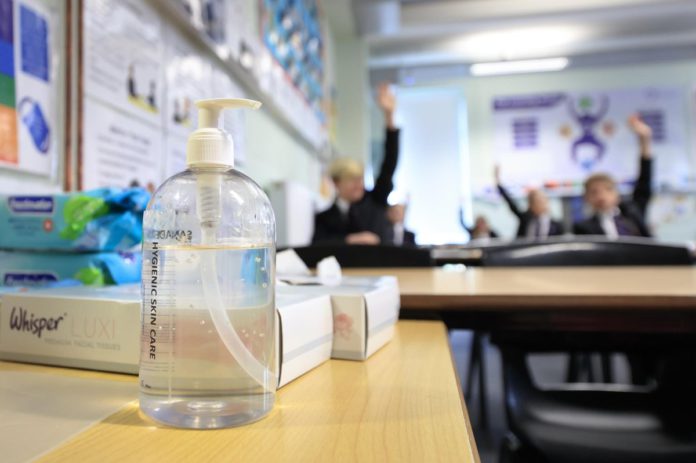 Breaches of coronavirus rules were behind dozens of school exclusions in Bedford last year, figures reveal.

Labor said the lack of clear government guidance on pandemic measures was threatening children’s futures and contributing to nearly 13,000 of these exclusions nationwide.

Department for Education figures show ‘deliberate and repeated breach of protective measures’ was behind 32 exclusions from Bedford schools in the 2020-21 school year – all of which were temporary exclusions .

Hand sanitizer in a classroom

All were in secondary schools.

Children across England have been excluded 12,965 times for reasons such as not adhering to social distancing, causing distress, for example by deliberately coughing near others, or any other deliberate breach of social distancing measures. school public health.

Schools were able to list multiple reasons for each exclusion for the first time last year.

Julie McCulloch, director of policy at the Association of School and College Leaders, said schools are working very hard to keep students and staff safe during the pandemic, and it’s not unreasonable that young people are required to comply with these measures.

However, MP Stephen Morgan, Labour’s shadow schools minister, said: ‘The Conservatives have created deep divisions in school exclusions, with the lack of clear guidance, particularly during the pandemic, threatening the future of children and failing communities.

“The government’s independent review highlights the need to address exclusions and ensure children are supported to improve their life chances.

“No parent wants to see their child kicked out of school, but once again the Tories have treated our children and their future opportunities as an afterthought.”

Figures for the most recent school year include a period in spring 2021 when Covid-19 restrictions meant only key workers and vulnerable children attended school in person, with others educated remotely.

Of the 16 possible grounds for exclusion, public health was the eighth most common.

The most common reasons were persistent disruptive behavior (27%), physical aggression against a student (24%), and verbal abuse or threatening behavior towards an adult (15%).

The National Association of Headteachers said schools following the guidelines were sometimes forced to suspend pupils for persistent breaches of rules and dangerous behavior, with headteachers making tough decisions to ensure safety of all.

Paul Whiteman, union general secretary, said exclusions are always a last resort – and have fallen to an all-time high across England – but should not mean the end of the road for the pupils affected.

He added: “Unfortunately, cuts to health and social care services mean the safety net for excluded young people has too many holes.

“This is something the government should address urgently.”

A spokeswoman for the Department for Education said permanent exclusions are a rare but necessary way to manage behavior – but should not mean exclusion from education.