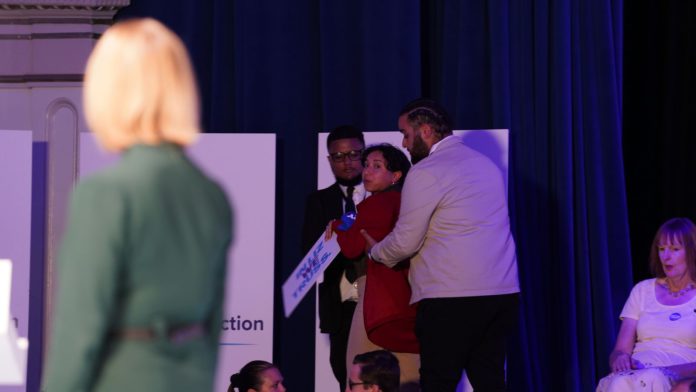 Liz Truss was interrupted by activists as she attempted to deliver her opening speech during a Conservative Party election campaign in Eastbourne.

Green New Deal Rising protesters shouted ‘shame on you’ and ‘Green New Deal’ as they held signs inside the campaign venue.

“I think we have infiltrators and I will wait for them to be expelled,” Ms Truss said, interrupting her speech.

Conservative members in the audience could be heard chanting “out, out, out!”

The Foreign Secretary added: “And I will ensure that militant activists such as Extinction Rebellion are not able to disrupt ordinary people who work hard and do the right thing and get to work.

“I will never, ever allow our democracy to be disrupted by unjust protests.”

Ms Truss was then interrupted by a heckling protester for the second time.

“Can I just say that I take it as a compliment that I am so popular with Extinction Rebellion,” joked the Foreign Secretary.

Green New Deal Rising describes itself as a movement of young people aged 16 to 35 disrupting politicians to protest the climate and economic crisis and demand a Green New Deal – a 10-year plan to create millions of good green jobs and restructure the economy.

Speaking to Sky News, one of the protesters who was expelled, Fatima Ibrahim, said those in the room were “angry”.