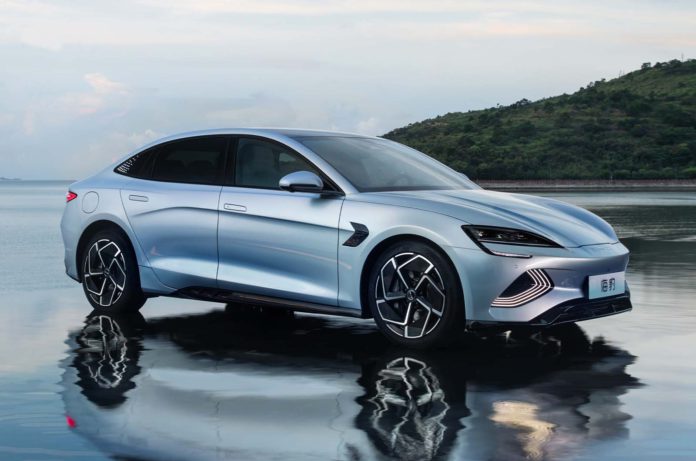 The new BYD Seal electric sedan has gone on sale in China, with BYD confirming that initial deliveries are expected to begin by the end of the month.

Revealed in May, the Tesla Model 3 rival is said to have attracted up to 60,000 pre-orders from Chinese customers.

The Seal is based on BYD’s e-Platform 3.0 framework, making it the third BYD car to do so after the Dolphin and Yuan Plus, and comes with the choice of two different BYD Blade batteries, 61.4 kWh and 82.5 kWh.

Both feature BYD’s lithium-ion phosphate (LFP) battery cell technology and use cell-to-body (CTB) construction, meaning the battery module is integrated into the body structure – a first for BYD.

The new construction process is said to provide the body of the four-door Seal with high torsional stiffness of up to 40,000 Nm/deg.

A long-range rear-wheel-drive model occupies the middle of the Seal range. Its 308hp rear-mounted electric motor is combined with the 82.5kWh battery, resulting in a 0-62mph time of 5.9s and a 150km (93 mile) increase in range. CLTC compared to its less powerful sibling at 700 km (435 miles).