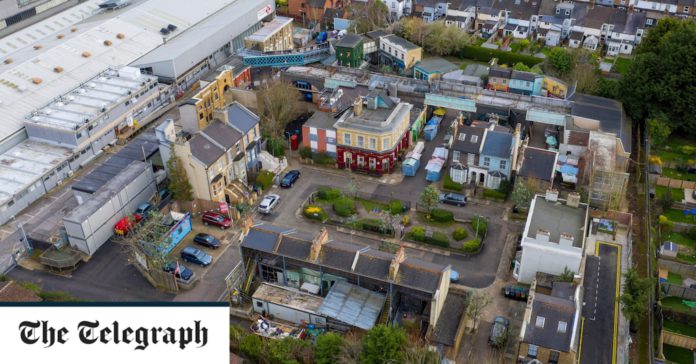 The BBC has hoisted a for sale sign on the studio behind EastEnders, as the broadcaster battles falling license fee revenue.

The company plans to offload BBC Studios Elstree and lease the space to a new owner, allowing the long-running British soap opera to continue filming at the site.

As well as hosting EastEnders, the studio has been used for BBC events, such as the Children in Need broadcasts and its coverage of the UK election. Elstree is said to be worth around £70m.

Commercial estate agents Lambert Smith Hampton were hired to find potential suitors, according to an advertisement seen by The Telegraph, which described it as “a unique opportunity to acquire an iconic piece of production history and write the next chapter.

The broadcaster is willing to explore “a number of potential disposal structures,” the listing reads.

The sale is part of efforts by Tim Davie, the BBC’s chief executive, to boost the organization’s commercial returns amid the continued erosion of its £3.2billion annual license fee income .

These efforts helped the broadcaster’s commercial arm – BBC Studios – make a record profit of £226million last year. However, he faced internal resistance to some of his plans.

A decision to capitalize on the podcast boom by marketing Radio 4 programs to overseas listeners has met with backlash from some BBC staff, who believe it could undermine the public service values ​​of the BBC. organization.

The decision to offload Elstree comes as the TV and film production industry grapples with a severe shortage of studio space due to an insatiable demand for content from US streaming companies.

Netflix already has exclusive access to most of the Shepperton studios in west London, while Disney leases most of the Pinewood studios in Buckinghamshire.

It is understood that BBC executives view the sale of the studio as an opportunity to cut its operating costs and reduce its carbon footprint.

A BBC spokesman said: “As part of our ongoing review of the BBC property portfolio, we are exploring the sale of Elstree and the lease of part for continued production of EastEnders.

“There are long-term commitments for the continued use of Elstree, for parties that support EastEnders.”