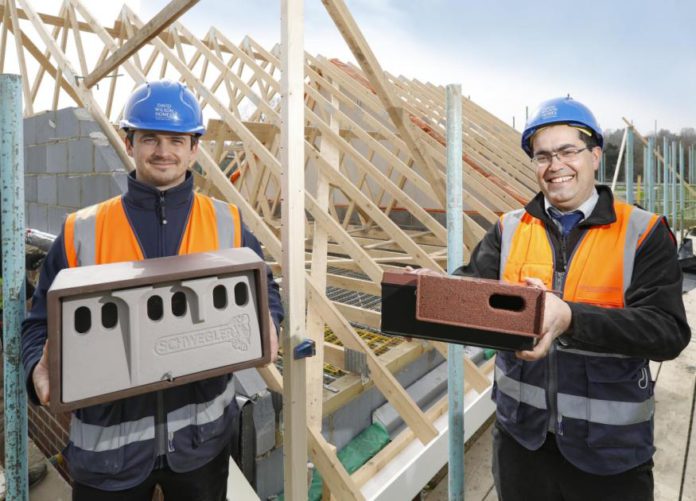 A HOME BUILDER has teamed up with a wildlife charity to create a special brick to encourage the nesting of endangered birds.

Research finds populations of fast-moving birds declined by 58% between 1995 and 2018, with the birds being added to the UK Red List of Conservation Concerns last year.

David Wilson Homes has launched a new initiative to protect swifts at its developments across the country, including at Ecclesden Park in Angmering.

The homebuilder has partnered with the RSPB to develop ‘Fast Brick’, the first custom-designed nesting brick for swifts that can be safely implemented into the fabric of homes.

Due to changes in roof designs, refurbishment of older properties and demolition of derelict buildings, there has been a rapid loss of habitats across the UK.

David Wilson Southern Counties will install a total of 78 speed bricks at Ecclesden Park, Water Lane over the life of the site.

A total of 4,000 bricks have been introduced to the homebuilder’s developments in the southeast since 2016.

David Thomas, Managing Director of Barratt Developments, said: “Swifts are such important birds and we are pleased with the 4,000 speed bricks we have installed so far.

“But, we must continue to work hard with the RSPB to give these birds even more homes, which is why we are increasing our target of 3,000 more rapid nesting bricks, aiming to fit some 7,000 in total in our homes across the country by 2025.”

The RSPB has also partnered with the Swift Local Network and the charity Action for Swifts to develop Swift Mapper, a web-based and app-based platform that allows anyone to record swift activity and nesting sites .

Swift Mapper is available for download from the App Store and Google Play Store or can be viewed online.