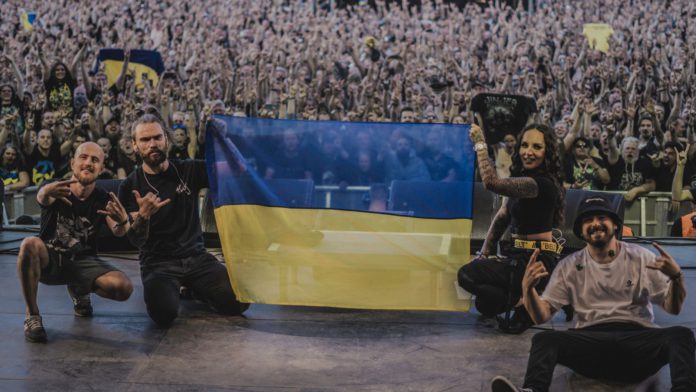 Nearly six months later, the things he saw while driving for his life are sights he will never forget.

“All of a sudden these explosions started happening right around me,” he told Sky News. “Everything started to explode around me, I was lucky just to get out of it. Just pure fortune. I don’t know how, but I managed to hunt.”

Abdukhanov is the bassist of the metal band Jinjer. For the first month or so after the bombs hit, he says he couldn’t even consider picking up his guitar. But the group, which has a huge fanbase, has been granted permission by the country’s culture ministry to perform as ambassadors, continue to raise awareness and help raise funds for the Ukrainian people.

Through fundraising that included the sale of merchandise emblazoned with the slogan ‘We Want Our Home Back’, in Ukrainian yellow and blue, they raised more than $130,000 (£107,500).

Because, following the initial wave of aid as the world reacted in horror to what was happening there, inevitably as the war continues, most people cannot sustain the initial high levels of support.

Abdukhanov says he understands that.

“You have to be realistic,” he says. “You can’t keep the same level of support all the time. People all over the world, no matter how supportive they are in the beginning… they just can’t keep up. I don’t blame them for that.

“I appreciate every single person who has donated, helped support Ukraine, helped our fight against Russia. And enough is enough. The only thing I ask people around the world is not to turn their backs on us.

“Everyone has their own family, everyone has children to raise. I’m not asking people to be too heroic, but please don’t turn your back on us. Remember people are dying .

“Keep in mind that not far from you, on the same European continent, there is a war, a real war – not only…