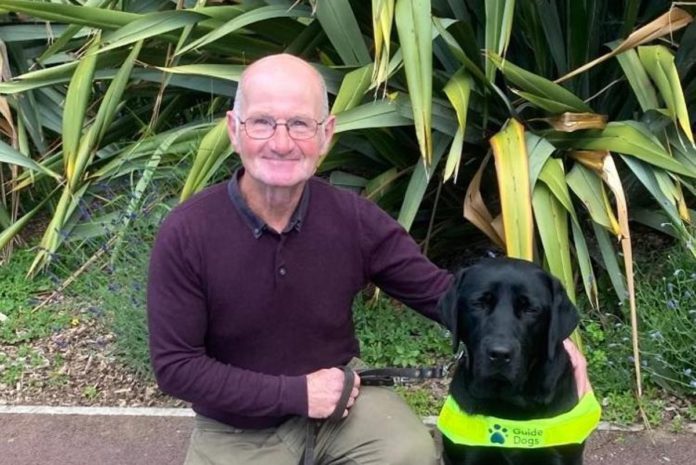 Ian West, 67, will visit every Premier League football club across the country over the next five months.

His quest began with a trip to Selhurst Park in London for the season opener between Crystal Palace and Arsenal on August 5.

He will then walk to each of the other 19 Premier League grounds, ending his epic New Year’s Eve football walk to the City Ground in Nottingham for Nottingham Forest’s game against Chelsea.

Ian, who spent 31 years in the Royal Navy, takes on the challenge dressed in a jacket with 20 knitted guide dogs, each representing one of the teams and wearing their colours.

Hucknall’s adviser, John Wilmott, pays a personal tribute to his close friend and…

He took a solo walk around the UK coast for charity in 2018 and raised over £7,000 which was used to name and support guide dog pup Banjo.

He said: “I am delighted to take on this challenge, it is a great charity.

“I want to do whatever I can to help them support people living with vision loss, to live the life they choose.”

Ian’s brother was diagnosed with macular degeneration, a condition that affects your central vision, which inspired him to raise more funds and awareness for the charity.

Nichola Bonsall, Community Fundraising Relations Manager at Guide Dogs, said: “We are extremely grateful for Ian’s continued support as a fundraiser and for him to take on another fundraising challenge. unbelievable.

“It costs £54,800 to support a guide dog from birth to retirement and as a charity we rely almost entirely on public donations.

“If you can spare a few pounds, support him and help him achieve his goal.”

Almost two million people in the UK live with vision loss which has a significant impact on their daily lives.

Of these, around 180,000 rarely leave their homes alone and lead solitary and isolated lives and guide dogs want to help these people.