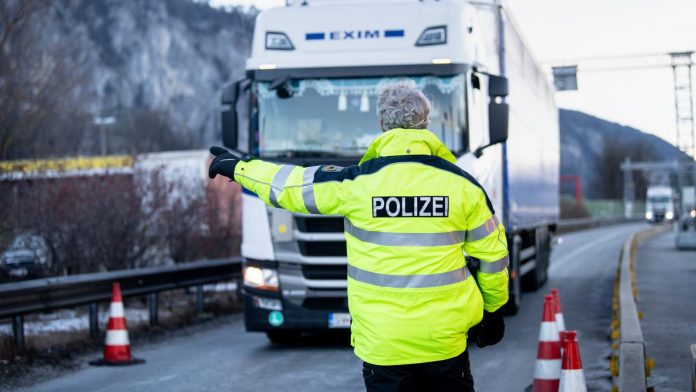 Faced with the spread of variants of the coronavirus, we are witnessing, as at the start of the Covid-19 pandemic in March 2020, a return of border closures between European countries. Direction Germany, England and Iceland.

In Germany, part of the borders closed

Germany partially closed its borders, Sunday, February 14, to the south with the Czech Republic and Austria in an attempt to contain the spread of the coronavirus variants. At the risk of friction and criticism from the European Union. Each driver is checked, 1,000 police officers are mobilized in Bavaria and Saxony, on the southern borders of the country. Only residents of Germany and cross-border workers are allowed to enter. Motor carriers too, but only if they show a recent negative test. Otherwise, they must turn around or perform a test in one of the algecos installed on site and wait a long time for the result.

Rail links and coach trips are also interrupted to three countries in southern Germany: the Czech Republic and further afield Slovakia, two countries which are among the main affected in Europe, as well as Austria where the ‘we find the largest European focus of the South African variant. Germany, which could close in the coming days new entry points in the West with Luxembourg and the French department of Moselle.

Brussels criticizes the German decision but Berlin assumes. Health Minister Jens Spahn defends “a measure certainly drastic but temporary”, the formula used is “as long as necessary”. He claims that European law provides for such exceptions. Germany, where the epidemic situation is improving, does not want to see its efforts wasted by less strict containment measures at its neighbors like those ski resorts which have long remained open on the other side in the Austrian Tyrol.

In Bavaria, there are now villages near the border where the rate of variants exceeds 50%. The leader of the region, the conservative Markus Söder, possible successor of Angela Merkel at the head of the country next September, rejects all forms of criticism while speaking “absurdity”. “However, this is not the end of a free Europe, he explains, on the contrary, it is strengthening it if it manages to prevent a new wave. “

In Iceland, double PCR test to access the island

Iceland is the country with the lowest incidence rate in Europe and for three weeks the only country classified “green” on the map of the European Center for Disease Prevention and Control. A dream situation in particular due to strict border restrictions. You have to brave a double PCR test interspersed with five days of mandatory quarantine for just a month before you can roam freely on the volcanic island.

Traveler-on-arrival testing in Iceland was introduced eight months ago and has been stepped up over time. These measures are essential today for Víðir Reynisson, senior police official and regular information points for the authorities: “The system we have put in place at the borders, for example, has enabled us to detect around 60 people with the British variant so far. We thus stop the introduction of new variants into the country.” Currently less than 300 people arrive in Iceland every day compared to more than 18,000 normally.

Icelanders can thus live an almost normal life. There is indeed an air of normality in the capital Reykjavík and in the four corners of the island where the inhabitants can do things that are still impossible in the majority of European countries such as going for a swim in the pool, exercising in a gym. or drink a beer in a bar. Víðir Reynisson explains the key to Icelandic success: “First is the nation’s willingness to comply with any restrictions put in place. Add to that the strength of our medical community to deal with it and then, of course, the combination of tracing. contact cases, testing and genetic analysis of all positive cases. “ Without forgetting, of course, that Iceland is an island of 365,000 people, with the lowest density in Europe, and an international airport through which more than 98% of its travelers arrive.

In England, mandatory quarantine system at the hotel

Across the Channel, travel abroad is already limited, only allowed for compelling reasons, and going on vacation is not. On Monday, February 15, a mandatory quarantine system goes into effect at the hotel for certain travelers and at their own expense. The principle is quite simple. All British citizens, Irish people, or foreigners residing in the United Kingdom who arrive in England from countries deemed particularly at risk must comply. There are a total of 33 countries. Those where the Brazilian and South African variants appeared and spread, ie southern Africa, South America and Portugal. A list called to evolve.

Since Monday morning, these travelers before coming have had to book and pay for a quarantine hotel via a dedicated site. Not just any accommodation, the government has chosen several. It costs a little less than 2,000 euros for ten days, meals and tests included. Then, they must register on arrival at the airport and there they are taken directly to their place of strict quarantine.

In practice, the system seems to have many flaws. First, it is only declarative based. Like pretty much all anti-Covid rules in the UK. So a traveler who decides to lie about his origin, will not do this quarantine. Especially if he makes a stopover before arriving here. For example, there is no direct flight from Rio. So the government agitates fines of more than 1,000 euros and even a prison sentence of up to ten years firm for lying.

At the same time, the customs union recognizes its total lack of preparation. They do not have a roadmap, the instructions are vague and they are afraid of being in contact for a long time with travelers who arrive precisely from these destinations deemed to be at risk. And then, this measure has been brandished for weeks so the people concerned have already traveled or put aside their trip to the United Kingdom. So it looks a lot like a symbolic set-up.