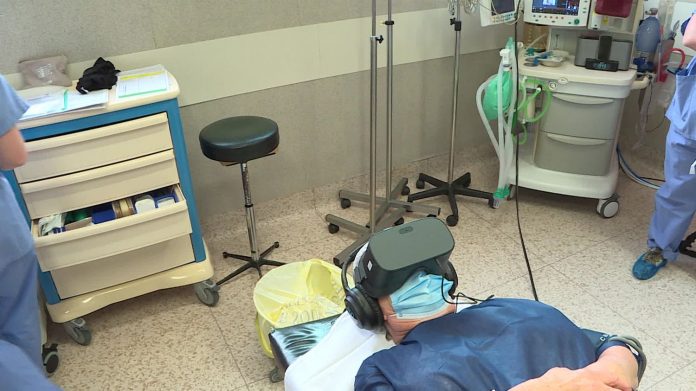 It is a technological solution increasingly used by hospitals. Using headphones and earphones, patients are immersed in a soothing world that helps them relieve the stress of the procedure. #IlsOntLaSolution

Travel to the Camargue departing … from a surgical unit. A virtual reality headset placed over her eyes, this patient who is going to be operated on for varicose veins can escape outside the hospital context, into a serene and soothing world. A device inaugurated in the vascular medicine department of the Ambroise-Paré clinic in Nancy.

Objective: to make patients forget the surgery by soothing them. The method is used in particular when the person treated must remain motionless for several hours. Anxiety and difficulties in remaining static are thus reduced, the patient-doctor bond is strengthened.

“When I do local anesthesia, it’s little bites all over the place. And it’s true that they don’t move, they’re somewhere else. It’s more pleasant for me and it relieves the patient.”, explains Emilie Dauphin, doctor of vascular surgery.

And everything is planned to facilitate the operation. When an act can be painful, caregivers divert the patient’s attention using virtual reality. “As the doctor takes a bite, we’re going to create a distraction on the screen for the mind to escape”.

The clinic has had this device since last November. This is enough to reassure patients and make it easier for them to experience the surgery, immersed in 360 ° in an environment far removed from that of the hospital. “I was far from thinking that we were using scalpels” the operated patient confides at the time of the assessment.

50 vascular interventions have already taken place in virtual reality. And the clinic plans to extend it to other specialties and use it in particular when placing a pacemaker.