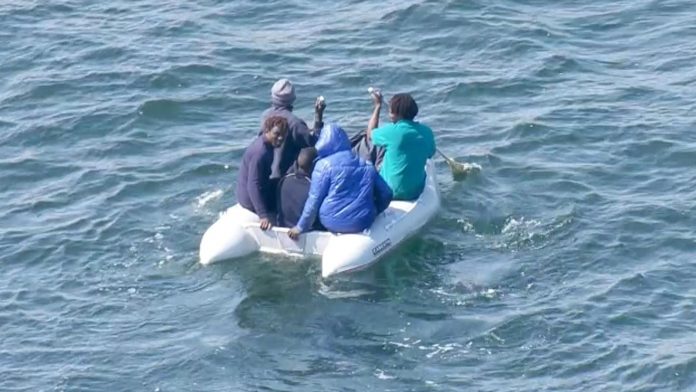 A group of migrants was filmed by Sky News paddling out of France in a dinghy.

It was believed that there were around five people aboard the small vessel, two of whom were using oars, as a French maritime vessel was sighted nearby. It is not known if the migrants were taken on board.

It happens the same day that a second group has been seen crossing the Channel – and being taken care of by border force officials.

Sky’s Jemima Walker, reporting from the port of Dover, said: “People on the ground here have shown us photos of what we believe to be three patrol boats arriving this morning with so many people on board, huddled very closely together. against others.

“We believe from the photos that there are about 100 people on these boats – and the kids are certainly one of them.”

In one video, a boy who looks around five or six stands alone with a towel around his shoulders as he is helped by UK officials.

Walker added, “There are still many, many people who are ready to get on these boats and take this incredibly dangerous journey.

“This year we have seen a big increase in the number of people taking these trips compared to last year. This year we believe that 2,000 migrants have already made this trip across the Channel.”

Home office plans to make it much more difficult for those entering the UK illegally – using routes such as small boats and stowaways in lorries – to claim asylum.

Deemed to be “the biggest overhaul of Britain’s asylum system in decades,” the government believes the changes will deal a blow to organized crime networks, which are trying to smuggle thousands of men, women and children through in Britain every year.