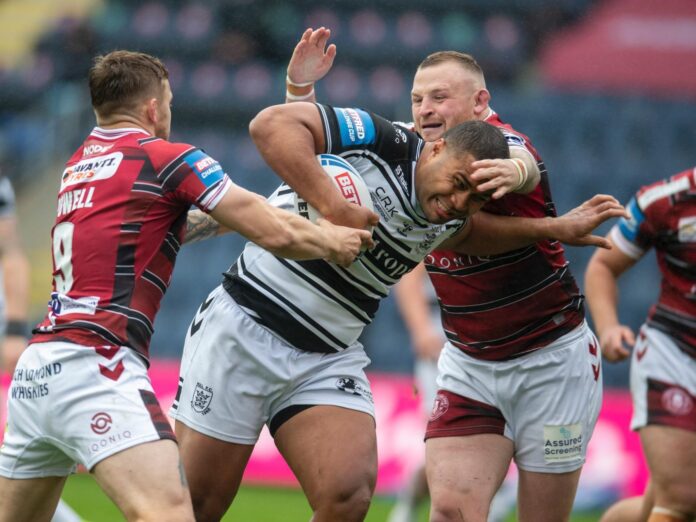 The Airlie Birds prospered 20-10 when they ruined their opponents’ 100 percent win start to the season and advanced to the semifinals.

Prop Chris Satae scored two attempts for Hull to win 16-4 and, when Dom Manfredi responded in the 78th minute, Adam Swift ran 70 meters for his third score on the final play of a powerful quarterfinal.

“I’m very proud of the performance,” said Hodgson, whose team had pushed Wigan close but lost 16-14 in the Super League last week.

“We had to change our rotations a bit as we were a little short on props with Brad Fash suspended and Scott Taylor, Josh Bowden and Masi Matongo injured.

But Chris was just terrific. It is such a big body.

“I thought it was outstanding. He got our sets rolling and we enjoyed his ball games.

However, it was Hull’s defensive application that was perhaps most impressive.

“It has to be against Wigan,” Hodgson added, after watching his squad, eliminated at this stage by Wigan last year, produce such a fierce effort.

“They just don’t go away. But the guys enjoyed the routine of it.

“Fortunately, we put in enough to get the victory.

“We learned some lessons from the loss to Wigan last week and we had to be better. We were.

“We talked about making a memory today to get us where we want to be.

“I don’t care who we get in the semifinals and luckily we now have a nine-day turnaround until our next game.”

Both qualifiers will be played on Saturday, June 5.

Support The Yorkshire Post and subscribe today. Your subscription will help us continue to bring quality news to the people of Yorkshire. In return, you will see fewer ads on the site, get free access to our app, and receive exclusive members-only offers. Click HERE to subscribe