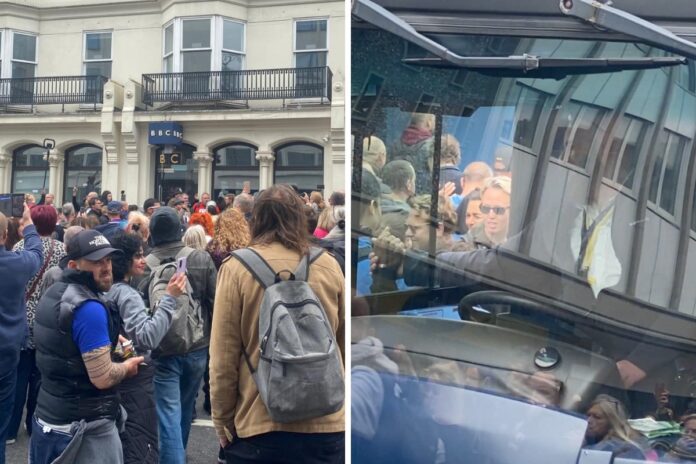 A BUS company apologized after one of its drivers was seen shaking hands with dozens of anti-lockdown protesters.

Protesters stole banners, whistled and shouted “freedom” to the public as they made their way through the streets.

Video of the protest shows a bus from the 14C County Hospital and Brighton Station which was bought by protesters on Queens Road.

The driver beeps for support and shakes hands with dozens of protesters on the way – breaking Covid safety rules.

Brighton and Hove Buses Managing Director Martin Harris said: ‘We apologize to the people of Brighton and Hove – and, in particular to our customers, that our driver did not follow basic safety rules Relative covid is also company policy.

“An investigation is already underway to find out why our driver broke them.”

Crowds started to gather at Brighton station shortly after noon, handing out flyers chanting “you can stick your Covid passport in your ***”.

The meeting point for the protest was at Hove Lawns Peace Statue, where protesters gathered from 1 p.m.

Traffic on the seafront was halted when protesters crossed the A259 road near Brighton Palace Pier.

The large crowd walked past Steine ​​Gardens as a loudspeaker played a rap song with the lyrics “don’t take the vaccine”.

Horns of support could be heard as the protesters made their way to North Street.

A woman with a microphone berated patrons as they enjoyed food and drink at New Road restaurants. Another protester tried to “educate” people who were making fun of the group.

There were chants of ‘shame on you’ as the crowd pulled into the BBC offices in Queens Road.