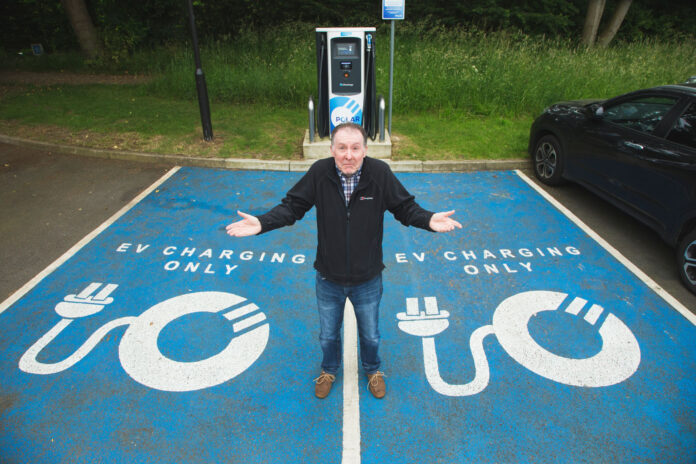 Charging an electric car is easier than you might think, and it is getting easier and easier. It still takes a bit of planning compared to a traditional internal combustion engine machine, especially on longer journeys, but as the charging network grows and the battery life of cars increases, you are less and less likely to be taken aback.

There are three main ways to charge your electric vehicle: at home, at work, or by using a public charging station on the side of the road or at a gas station. And of course, if you’re running a Tesla, there’s the company’s dedicated Supercharger network that includes over 800 locations, from highway services to many hotels and shopping malls. Finding one of these chargers is pretty straightforward, with most EVs having satellite navigation with plotted locations, as well as mobile phone apps like ZapMap showing you where they are and who’s running them. BP Pulse, Polar, Ecotricity and Ionity are among the best known suppliers. NewMotion is the new name for Shell’s recent charging network which uses a card or app to access over 3000 charging points on 17 different networks across the UK, including Ionity fast chargers as well as its own stations Shell refill. You can also use the service across Europe, increasing your available chargers to around 200,000 in 35 countries.

Public charging stations offer a range of payment methods, often via a special card or a payment app on your phone. That said, many chargers are increasingly featuring contactless technology, which means you can pay with a regular debit or credit card. Legislation has also been enforced to allow “ad hoc access” without having to pay a membership fee or make a long-term financial commitment before being able to bill.

Ultimately, where and when you charge depends on how and where you use the car. However, if an electric vehicle fits your lifestyle, chances are most of your charging will be done at home overnight, with only short recharges at public charging points when you’re on the go.

How long does it take to charge an electric car?

The time it takes to charge your car basically boils down to three things: the size of the car’s battery, the amount of electric current the car can withstand, and the speed of the charger. Battery size and power are expressed in kilowatt-hours, or kWh, and the higher the number, the larger the battery and the longer it will take to fully replenish cells.

Chargers provide electricity in kilowatts (kW), with anything from 3 kW to 150 kW possible – the higher the number, the faster the charging rate. Use the most basic charger and even something like a Nissan Leaf with a 40kWh battery will take up to 12 hours to fully charge. In contrast, the latest fast charging devices, typically found at gas stations, can add up to 80% of a full charge in half an hour. So which charger is the best?

There are basically three types of charger: slow, fast, and fast. Slow and fast chargers are typically used in homes or for street charging stations, while for a fast charger you will need to visit a dedicated gas station or charging center, like the one in Milton Keynes. Some are tethered which means that like a gas pump the cable is attached and you simply plug in your car, while others will require you to use your own cable, which you will need to carry around in the car. Here is a guide for each: