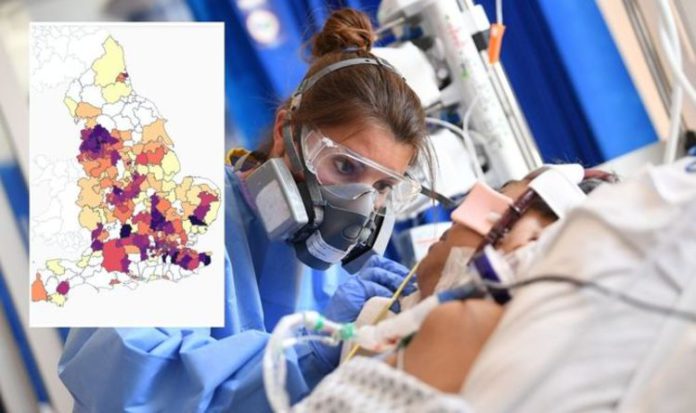 Experts have warned ministers that lifting all remaining Covid restrictions on June 21 could leave the NHS struggling to cope as it already faces a huge backlog of non-coronavirus cases. Downing Street said it was too early to question whether plans to end the lockdown could move forward.

Professor Ravi Gupta, of the University of Cambridge, said that although the new cases were “relatively small”, the Indian variant had fueled “exponential growth”.

The UK reported more than 3,000 new Covid infections on Sunday for a fifth day in a row.

Previously, the UK had not exceeded that number since April 12.

Professor Gupta told the BBC the UK is already in a third wave of infections and at least three-quarters of cases are the Indian variant.

He said: “Of course the number of cases is relatively low at the moment.

“All the waves start off with a low number of growls in the background and then go explosive, so the key here is that what we’re seeing here are signs of an early wave.”

However, he said the number of people who had been vaccinated in the UK meant this wave would likely take longer to emerge than previous ones.

He said, “There may be a false sense of security for a while, and that is our concern.”

Prof Gupta – a member of the government advisory group on new and emerging respiratory virus threats (Nervtag) – said the end of restrictions in June should be delayed “by a few weeks while we gather more intelligence.”

He added: “If you look at the costs and benefits of being wrong, I think it’s strongly in favor of the delay, so I think that’s the key thing.”

He told ITV: “I think it’s unfortunate that everyone has that date in mind because what we really need to do is figure out how things are going and adapt accordingly.

“This time around we should be careful, wait and see what happens, then let everyone free, if you like, once we know for sure it’s safe and we can do it without. have another round of lockdowns. “

Environment Secretary George Eustice said the government could not rule out a delay in easing the planned lockdown.

He said the government had to take “one step at a time”.

He said: “We cannot rule out anything. We know it has been a difficult pandemic, a dynamic situation.

“We have to render this judgment a few weeks before.

“It will only be then that we will see the impact of the last easement we made on May 17th.”

A final decision on lifting restrictions in England will be made on June 14.

Vaccines Minister Nadhim Zahawi also refused to deny that some restrictions such as wearing masks and working from home could remain in place to reduce the spread of the virus.

Senior science advisers believe that, wherever possible, working from home makes sense beyond June, as it would reduce the number of people coming into contact with each other.