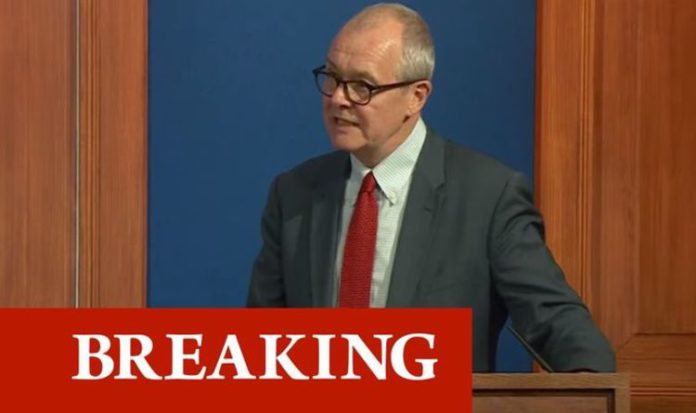 At the Downing Street press conference today, the Government’s Chief Science Officer joined Prime Minister Boris Johnson and Professor Chris Whitty. But Sir Patrick has issued a terrifying warning about the future of the virus.

Sir Patrick said: “It is a virus that is going to be with us forever.

“If you look back and look at the increases we’re seeing now in hospitalizations.

“If we didn’t have the vaccination that we have, we would be looking at an issue of more lockdown needed.

“We are now in a position where we are in a race against the virus.”

He continued, “And the vaccines have to get ahead.

“And if you’re in a rush with someone, you’re not suddenly helping them put the afterburner on so they can pass you.

“And so that’s really what we need to do. And the four week timeframe should reduce whatever peak it is by about 30 to 50 percent.”

He continued, “At this point, based on the evidence that I can see now, I am confident that we will be able to move forward with full Stage 4, the full opening.”

But he added: “That, of course, does not rule out the possibility – I’m afraid, and we have to be honest about this – the possibility that there is a new variant that is much more dangerous, that killing people in ways we currently cannot predict or understand. “

Mr Johnson said the government will “monitor the position” every day and if the risk has diminished it will move to the fourth stage of reopening England.

He said: “We will monitor the position daily and if after two weeks we conclude that the risk has decreased, we reserve the option to move to step four and a full open sooner.”

He said he was “confident” that it would not take more than four weeks and that the restrictions would not go beyond July 19.

Mr Johnson continued: “There is no question that vaccines work and the scale of vaccine rollout has made our position incomparably better than in previous waves.

“But now is the time to let go of the accelerator, because with caution we now have the chance in the next four weeks to save thousands of lives by vaccinating millions more.”

The delay in reopening came in the wake of the spread of the Delta variant which Mr Johnson said meant they “obviously faced a very difficult choice.”

Mr Johnson said: ‘We can just continue with the whole of Stage 4 on June 21, although there is a real possibility that the virus will overtake vaccines and thousands more deaths would ensue, this which could have been avoided otherwise.

“Or we can give the NHS a few more crucial weeks to put those remaining jabs in the arms of those in need.

“And since today I can’t say that we passed our four tests to go to Stage 4 on June 21, I think it’s reasonable to wait a little longer.”

But he said he was “confident” that July 19 will be a “final date, not a” not before “date.