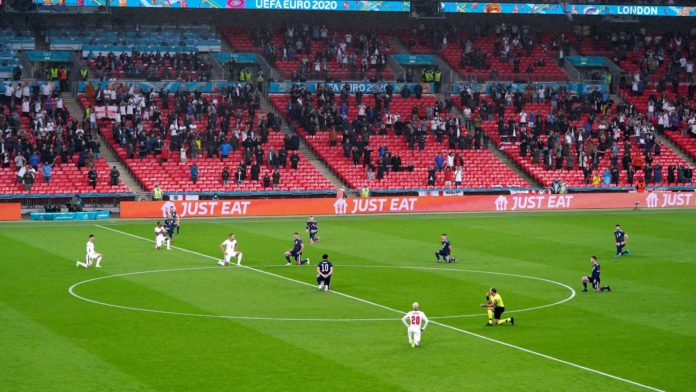 England and Scotland fought to a 0-0 draw at Wembley in the rain in their highly anticipated Euro 2020 group match.

The result means England still need at least one point from their last game against the Czech Republic on Tuesday to advance to the round of 16 while Scotland still have hopes of progress.

England changed their two full-backs ahead of their battle against Scotland, with manager Gareth Southgate putting Luke Shaw and Reece James in to replace Kieran Trippier and Kyle Walker – the latter missing the squad entirely.

A mixture of boos and cheers could be heard at the start of the match as both groups of players knelt before kick-off.

After initially saying they would not kneel down, the visitors gave in and – despite both groups of supporters booing their rivals’ national anthems – the reaction to the anti-racism move has been the most positive of recent matches, with cheers barely drowning audible boos. .

England came close to goal in the 11th minute of the Euro 2020 match when John Stones directed the ball into the post and again shortly thereafter when midfielder Mason Mount attempted to score following an error from Scottish midfielder Scott McTominay.

Phil Foden, playing in midfield for England, also came close to a goal in the first half but skewed the ball, letting it pass the post.

Scotsman Kieran Tierney tried to score in the opening 25 minutes of the game from a distance of around 25 yards, but he flew away from the goal, leaving England goalkeeper Jordan Pickford …