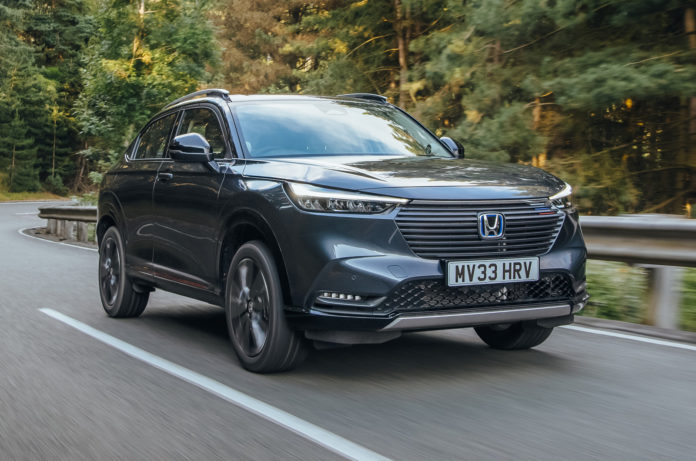 Honda has confirmed key Europe-specific details of the all-new HR-V crossover ahead of its market launch later this year.

The Nissan Juke rival will use a gasoline-electric powertrain variant of the smaller city car Jazz, with which it also shares its “Global Small Car” platform. A 1.5-liter Atkinson cycle four-cylinder gasoline engine is mated to a pair of electric motors for a combined output of 129 hp and 187 lb-ft – slightly more than the Jazz, likely due to the increased size of the HR-V.

Electric motors, housed next to the gasoline engine under the hood to maximize interior space, are responsible for most of the propulsion, with the engine serving as a generator. At “higher and more constant speeds,” the gasoline engine automatically takes over, but the powertrain can operate in three different drive modes – Eco, Normal, and Sport – for different levels of electric combustion input.

The design of the third-generation HR-V is a radical departure from that of its predecessor. Although it closely matches the dimensions of its predecessor, the revised proportions and emphasis on space efficiency (the HVAC system is as compact as it gets and the EV battery is mounted under the trunk floor, for example example) increased rear legroom by 35mm and improved boot space. The ride height is also increased by 10mm, while the roofline has been lowered by 20mm.

Four adults can be accommodated in “maximum comfort,” according to Honda.

The interior has been redesigned to maximize the feeling of space, with a minimalist dashboard, a single dashboard aligned horizontally, and Honda’s “Magic” fold-and-fold rear seats in the rear. The instrument panel is a revised design, incorporating a 9.0-inch infotainment touchscreen and 7.0-inch TFT display in the gauge cluster, and new L-shaped vents in the upper corners of the panel edge to free up space.