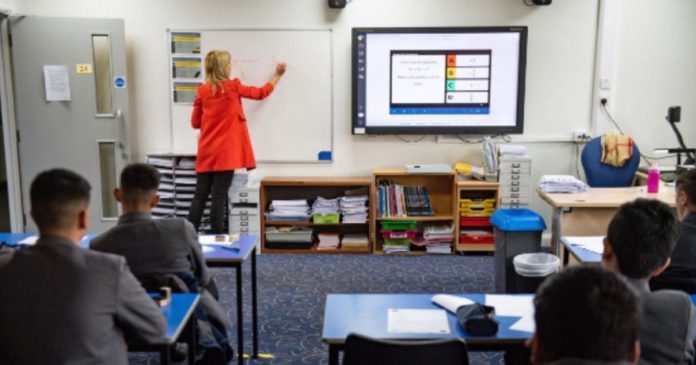 Teachers were not at an increased risk of hospital admission with Covid-19 or severe Covid-19 at any time during the past school year compared to similar working-age adults.

This was the conclusion of a report from the University of Glasgow in collaboration with Public Health Scotland and published in the BMJ.

The results, based on Scottish data from March 2020 to July 2021, covered periods when schools were fully open, and also when they were fully or partially closed.

During the last period covered by the study, the delta variant was already circulating in the population.

Existing studies already indicate that teachers have not been at an increased risk of hospitalization with Covid-19, although some variation has been found depending on the type of teacher, and previous research predates release. generalized alpha and delta variants.

For the first time, this new study compared the risk of Covid-19 among teachers, and members of their households, with healthcare workers and working-age adults in the general population from March 2020 to July 2021 , when the delta was traveling.

After adjusting for factors such as age, gender, ethnicity, underlying medical conditions and deprivation, the results show that during the initial period of school closure (spring / summer 2020), the risk of hospitalization with Covid-19 was approximately 50% lower. among teachers and members of their household than in the general population.

In contrast, during this same period, the risk was almost four times higher among healthcare workers facing patients and almost twice as high among members of their households.

During the last school closure period (winter 2020/21), teachers and their household members again showed an approximately 50% lower risk of hospitalization than the general population.

During the first period of full school opening (fall term 2020), the risk of hospitalization among teachers increased by approximately 2.4 times, reaching a level similar to that of the general population .

In the summer term of 2021, when schools were also open and the vaccination of the Scottish population was underway, a smaller increase of around 1.7 times was observed.

The study also found that teachers and members of their household were at no time at higher risk for severe Covid-19 (intensive care admission or death) during the 2020-2021 study period.

Professor David McAllister, Professor of Clinical Epidemiology and Medical Informatics at the University of Glasgow and lead author of the study, said: “It is not possible from our study to say why when schools were mostly closed, teachers had a lower risk of hospitalization with COVID -19.

“It could be something special about the teachers themselves, or it could just be that they had less contact, on average, than other working-age adults at the time.”

“What we can say is that while the schools were open the risk of teachers being hospitalized with COVID-19 was about medium compared to other people of working age in Scotland who were similar in terms of age, gender and known underlying medical data. conditions.

“This was also true during the recent spike in infections due to the delta variant that occurred when schools were fully open.

“In addition to the finding that teachers were at lower risk of severe COVID-19 and that people who shared homes with teachers were not at increased risk, this is likely to be generally reassuring for those involved in face to face teaching.

“It is important to note that during the time that the delta variant was circulating, the vaccination rate among teachers was high, and we would continue to encourage anyone who offered a vaccine to do so. “

Most of the teachers were young (42 years old on average), 80% were women and 84% had no existing conditions.

During the study period, the overall risk of hospitalization with Covid-19 remained below 1% for teachers, healthcare workers and working-age adults in the general population.

No concomitant increase in the relative risk of severe Covid-19 in teachers and their family members was observed during either period, and the risks of hospital admission were broadly similar in the different educational sectors.