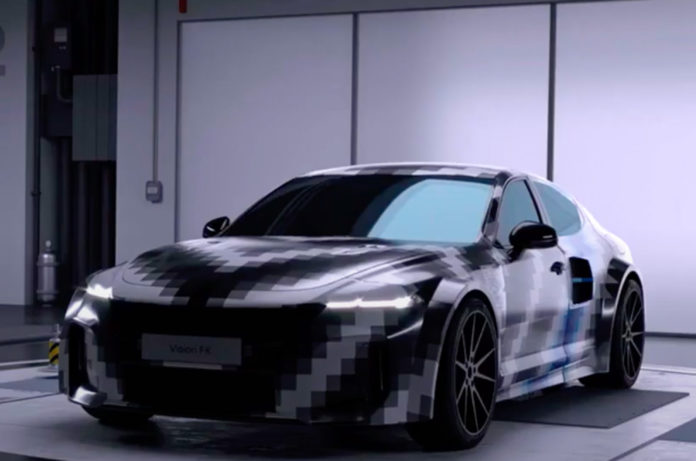 Hyundai will seek to “popularize hydrogen” by 2040 with a series of initiatives aimed at positioning fuel as an alternative to full battery electrification, and not just in the passenger car sector.

Following yesterday’s high-profile pledge to make its fleet of vehicles fully electric in Europe by 2035 and globally by 2040, Hyundai has pledged to mass-produce electric cars and utility vehicles at hydrogen fuel cell (FCEV).

Additionally, the company estimates that FCEVs will be priced similarly to battery-EV equivalents by 2030.

Leading the charge for hydrogen in the passenger sector is a new hybrid sports car called Vision FK at the concept stage. Previewed as part of Hyundai’s hydrogen strategy showcase, it’s supposed to pack over 671bhp, accelerate from 0-62mph in under four seconds, and achieve a range of over 373 miles.

Exceptionally, the Vision FK pairs its hydrogen fuel cell with a battery-powered electric powertrain developed by Rimac driving the rear wheels, which would make it the first car to use both systems, assuming production remains unchanged.

Hyundai has previously suggested that future models in the N Performance division will adopt hydrogen powertrain solutions, and the Vision FK concept is the first physical sign that they will indeed “use a combination of” batteries and power sources. to hydrogen, as suggested by the boss of N. Albert Biermann earlier this year.

No date for the car’s production has yet been given, and Hyundai has given no indication of the potential of such a system for deployment on other models, but given recent observations of a prototype for the next Ioniq 5 N, it is clear that the battery and hydrogen will be at the heart of the brand’s electrification plans.

Indeed, a spokesperson for the brand at the Munich motor show said yesterday: “We are engaged in both battery and fuel cell technologies. Electric vehicles like Ioniq 5 can perform long journeys with short recharge times “, just like FCEVs, which means” no need for big, heavy batteries. “

Hyundai previously confirmed plans to extensively update the existing Nexo crossover – one of two mainstream electric vehicles on the market – in 2023, before launching a pair of new autonomous FCEVs by 2025, but now Hyundai detailed the improved hydrogen powertrain that will underpin this shift in focus to hydrogen.

The third-generation fuel cell – following on from the first of the low-volume ix35 SUV of 2013 and the second iteration of today’s Nexo – will be available in two horsepower: 134 hp and 268 hp, the first of which would be by 30%. smaller than the system currently in use. It will therefore, Hyundai said, be easily usable in a wide variety of vehicle types, while the 200 kW version is intended for exclusively commercial applications.

More importantly, the third generation battery promises significantly longer life compared to the current system; Hyundai estimates that the Nexo’s current powertrain is capable of 5,000 hours or 100,000 miles of use, but the new system is expected to increase those numbers by 50-100%, with the “high durability” versions capable of around 310,000. miles of use – almost double the warranty mileage of a Hyundai combustion model.