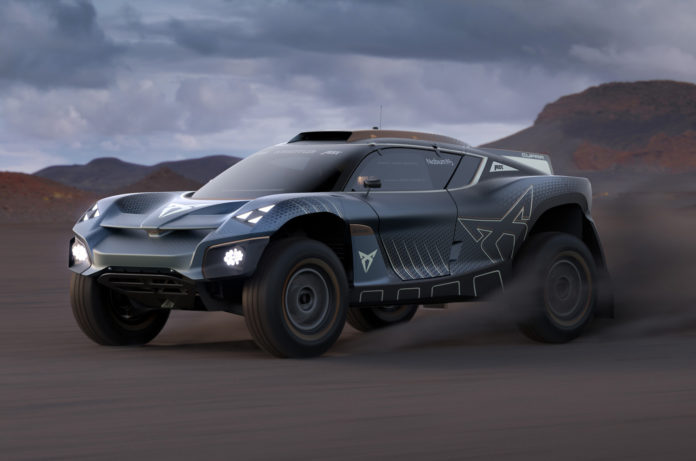 The Cupra Tavascan Extreme E Concept made its public debut at the Munich Motor Show, giving another glimpse of the road car that will go into production in 2024.

The sports SUV will be the brand’s second EV, after the Cupra Born model. No performance details have been confirmed at this point, but this racing concept features a 54 kWh battery and is capable of 0-62 mph in around 4.0 seconds.

Cupra boss Wayne Griffiths had to fight to make the original concept a reality after it launched at the 2019 Frankfurt Motor Show. This car had a 302bhp twin-engine powertrain, similar to the ID 4 GTX from sister brand Volkswagen, which was unveiled earlier this year with a 77 kWh battery and 298 miles of range. The ID 4 and the Tavascan concept use the same MEB platform.

Cupra highlights various changes from the current Abt Cupra Extreme E racing SUV, with LEDs allowing it to incorporate Cupra’s iconic headlights. These are placed in a 3D printed frame, which Cupra says reduces the need for expensive tooling and allows the team to create replacement parts in as little as six hours.

As much of the body as possible is constructed from flax fibers, a natural alternative to carbon fiber, reducing the impact of construction on the environment.

Meanwhile, the livery was designed to make the car stand out in the arctic, desert, glacial and oceanic regions that appear on the Extreme E calendar.

“We strongly believe in the Extreme E project as a whole,” said Antonino Labate, Director of Strategy, Business Development and Operations at Cupra. “Electrification, sustainability, gender parity and diversity are common values ​​between Cupra and Extreme E.

“The Cupra Tavascan Extreme E Concept is clear proof of the hard work we are doing at Cupra so that we can compete next season.”

It’s not yet clear when the next-gen Extreme E car will debut, but the second season of the fledgling series is expected to begin next spring.

“The Cupra Tavascan Extreme E Concept looks amazing, and in addition to being fully electric, it is now even more sustainable, using recyclable and organic materials,” said Cupra rider Jutta Kleinschmidt. “I can’t wait to compete with this new version! “

New Cupra Born 2022: the hot hatch is the first electric vehicle of the Spanish brand