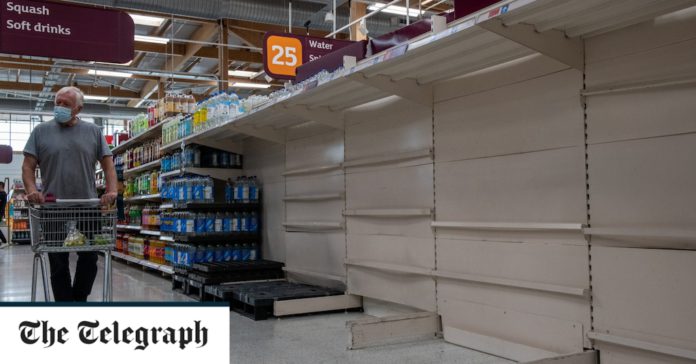 The dispute between the Conservative Party and business escalated sharply on Sunday after a Tory MP claimed food shortages were in the “long-term interest” of the UK economy.

As the economy is crippled by driver shortages and supply bottlenecks that have left gaps in supermarket shelves, Chris Loder, Tory MP for West Dorset, argued that it would be good if supply chains are breaking down.

In a stunning intervention at an event on the sidelines of the Conservatives’ conference, Mr Loder called supermarkets “business predators” and said disrupting supply chains would help local farmers.

Business leaders have called the idea “ridiculous”, “parochial” and “disrespectful” as pressure mounts on the government due to chaos in the supply chain.

His comments are likely to anger consumers facing shortages of goods and fuel and affected by a cost of living crisis.

Mr Loder said: “It is in our medium and long term interests that these supply chains break down.

“This means that the farmer at the end of the street will be able to sell his milk in the village store as he did decades ago. This is because these commercial predators – the supermarkets – have eliminated this and I would like it to come back. “

The comments were quickly rebuffed by business leaders who warned disrupting supply chains would hurt consumers and the economy. They said stepping back in time to rely on local producers would not work for the UK in the 21st century.

Responding to Mr Loder’s comments, a spokesperson for the British Retail Consortium said: ‘The existing retail supply chain model has seen the proportion of household income spent on food drop dramatically in recent decades. while diversifying the range of products available.

“This has enabled an unprecedented increase in the standard of living and the quality of life. It is a little ridiculous to claim the alternative.
“In reality, grocery supply chains are under immense pressure due to the impact of the pandemic and the exit from the EU. The UK government must take urgent action to increase the number of short-term visas for heavy truck drivers. “