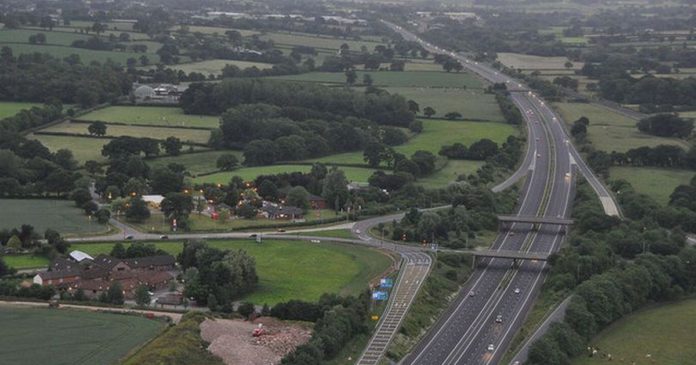 Plans for a major tourist attraction off the M5, including a surf lake, lagoon and beach, have stalled and are ‘past their sell-by date’. The attraction, put forward by the team behind The Eden Project, was to run just off junction 27 of the motorway in Mid Devon and the council had set aside around 71 hectares for it.

The Mid Devon District Council’s local plan 2013-2033 set aside the huge amount of land for the attraction which would have seen tourists flood in. Sir Tim Smit, the man behind the Eden Project as well as promoter Malcolm Dudley Williams, had backed plans to create the £200m surf lake and a ‘mini’ Eden Project. It is a partnership project between the Eden Project and Friends Life investors, which are part of the Aviva Group, reports Devon Live.

Richard Marsh, location manager at MDDC, explained during an economy meeting on Thursday, March 17 that the local plan calls for significant regional development of high-quality tourism, leisure and retail at the site of Junction 27. He said: “It is anticipated or described in the plan that this will be supported by ancillary road services and associated support infrastructure. The plan itself is particularly prescriptive in terms of the process by which this development is to show up when it comes to planning policy.”

He continued: “Since the adoption of the local plan, progress on the project at Junction 27 has been slower than expected. Progress has no doubt been influenced by the ongoing Covid-19 pandemic and the uncertainties and market changes that have been brought about As such, no plans have been advanced for the site and landowners or interested parties have not advanced the plans that would be necessary to facilitate the development of the site.

“Discussions with some of the landowners and interested parties more recently suggest that some development interest remains at Junction 27, but it is certainly questionable whether development would proceed in the manner that was initially seen during the adoption of the previous local plan.. So this opens up the question of whether the council and parties should think about what the form of development would look like now if it were to arise.

He said interest in the site remained and work was ongoing by the Eden Project team, who had secured £225,000 from the Community Renewal Fund to work on proposals for their component of the site and proposals for more wide. Mr Marsh continued: “While Mid Devon has no direct land interests, we have a development interest from the development perspective of the district as a whole. It is therefore in the interest of the district to participate in positively shape any development that arises in due course to ensure it meets the needs and expectations of residents, businesses and visitors.”

He added that the MDDC seeks to play a proactive role in engaging landowners to understand development aspirations and move any projects forward in the future. “In due course, the engagement will broaden to include businesses and residents more broadly and clearly,” he said. “There is also a relationship with the new local plan, which is currently being developed, so officers will need to consider the discussions we have and the timeline to ensure we manage both aspects side by side. . side.”

Councilors have expressed disappointment that the initial plans proposed for Eden Westwood are no longer going forward. This included the Eden Ark at the center of the project which would be divided into four areas and would include a hotel, visitor center, artificial surf lake, food hall, outdoor play areas, cafes and restaurants, small business stores and a designer clothing discount mall. The surf lagoon would be the heart of the outdoor adventure area, similar to Surf Snowdonia in Wales.

Councilor Christine Collis (Canonsleigh, Curator) said: “They’ve raised 225,000 for new plans because the surf park plans and everything are a little past their sell-by date now. Everyone was so blinded by the euphoria of what could be that now that it’s fallen everyone is wondering what’s next.”

She said it was now vital to encourage well-paying jobs in Mid Devon. Cllr Collis said: “When we look at proposals we have to think about pay. In the hospitality industry and in the shops that would have been there, it’s very low pay. House prices are getting out of control, and from First-time buyers can’t even think of getting one.We need to realistically look at what’s going on there so people can earn a decent wage to buy a decent home in the area.

She said the homes in Sampford Peverell were only being given the green light on the condition that the development took place at Junction 27 and “all the wonderful things it was going to produce”. She added: “Now it’s not here; there will be houses built that no one in the village can afford.

Mr Marsh replied: “Everyone is aware that market conditions are now different than they were before. The passage of time means it makes sense to review and ensure these plans are robust. and realistic.

“When it comes to wages, I totally agree. Obviously different sectors pay in different ways, but we know that hospitality and retail is one of the lowest paying sectors. One of the things we need to do is consider the retail demand, if the market still exists for this type of use, and therefore will need to be aware of that.”

Cllr John Downes (Boniface, Liberal Democrats) said: “We are all disappointed with the scale of development as it has been proposed to this council and then the delay in the latest local plan to include it. We all want to know why, and we want to know what can be done to bring it back to the scale that has been proposed. We want this to be a gem in Mid Devon and a place of destination.

Mr Marsh replied: “The land will always have to remain globally within this parameter as a regional attractive destination. We are looking at something that maintains this concept.

“There is a lot of interest around the district in various sectors. We also know that the district has strong strengths in certain areas, agriculture being one.

“I’m not too concerned about the need or the challenge of getting out there and involving people. When we’re clearer about the development as a whole, we’ll be in a strong position to engage more broadly.”

Cllr Barry Warren (Lower Culm, Non-Alligned) said the areas around Junction 27 have expanded, making it more difficult to consider any development. He said: “Junction 27 feeds into Willand and Halberton, and while all of that has stagnated, Hitchcocks Business Park has grown and continues to expand.

“We have phase two of Mid Devon Business Park coming up, and if we’re not paying attention to what’s happening closer to Junction 27, you could seriously affect transport to those other areas. Which has been proposed for Junction 27 previously would probably not be suitable for purpose now with the other developments which have been permitted at Hitchcocks and Mid Devon Business Park in Willand.”

EuroMillions: These are some of the National Lottery winners from all...

A department store at Home Bargains could fetch more bang for...