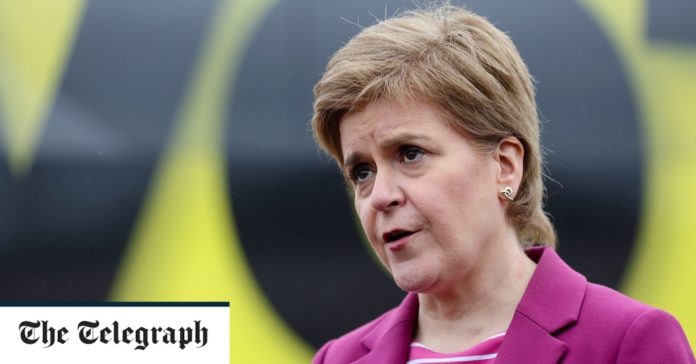 Nicola Sturgeon will be forced to beg Whitehall for additional funding after the SNP pledged to spend more than £640 per person in Scotland, economists have said.

The Scottish government’s spending review on Tuesday is expected to show a £3.5billion black hole in its budget by 2026-27, according to the Institute for Fiscal Studies (IFS).

David Phillips, associate director of the think tank, said the SNP faced “very tough decisions” unless the UK government came to the rescue with additional funding.

He said: “A series of costly spending commitments on top of underlying spending pressures means the Scottish Government faces a budget deficit of billions over the next four years on current forecasts.

“Because it cannot borrow to fund day-to-day spending except in certain limited circumstances, next week’s Scottish Spending Review could see the announcement of sizeable tax increases or spending cuts for lower priority services, and even the abandonment of certain political commitments, to balance the budget.

Alternatively, he said, the Scottish Government could “pin its hopes” on additional funding – which is “effectively the bet” the SNP made in its 2021 election manifesto.

Mr Phillips said the plan may not succeed this time.

He said: “While further top-up funding could be on the way, it seems unlikely that the UK Government will complement its plans with anything like enough to allow the Scottish Government to pay for all of its policy priorities without making hard choices. in matters of taxation. and/or other areas of expenditure.”

The £3.5billion deficit is the Scottish Government’s central forecast for its five-year deficit, but it has projected a range from a £10billion deficit to a £4billion surplus pounds sterling, which Mr Phillips said ‘almost certainly overstates the degree of uncertainty’. ”.

In his analysis, he said the numbers could change, but a “substantial” funding gap seemed likely.

Mr Phillips added: “Difficult choices on Scottish taxation and spending over the next few years will eventually have to be faced.

“Political considerations – including those relating to the Scottish Government’s desire to hold another independence referendum – will no doubt play a role in whether or not these choices are clarified next week.”

Mr Phillips said the Treasury would need to increase spending by more than £40billion to fill the Scottish government’s funding gap.